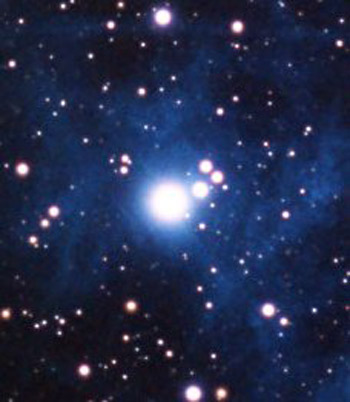 Alycone is actually a multiple star system. The primary, Alcyone A, is an eclipsing binary, consisting of two giant B stars with a separation of about 0.031 arc-seconds (roughly the distance of Jupiter from the Sun). The high rotational speed of Alcyone A – over 200 km/s (more than 100 times faster than the Sun) – has caused gas to spin from its equator into a surrounding light-emitting disk. This makes Alcyone A a Be star but with a disk thicker than usual.

The binary Alcyone A is orbited by three companions. Alcyone B and Alcyone C are both 8th magnitude white, main sequence A stars and are separated from A by 117 and 181 arcsec, respectively. Alcyone C is a Delta Scuti star whose brightness varies from magnitude +8.25 to +8.30 with a period of 1.13 hr. Alcyone D is a yellow-white main sequence F star, with an apparent magnitude of +8.7, separated by 191 arcsec from the primary.