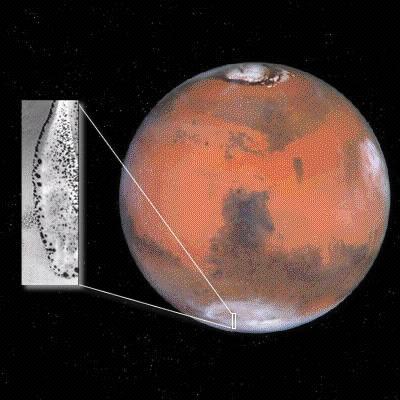 Images from Mars Global Surveyor (MGS) show dark spots near the south pole of Mars in early spring which a team of Hungarian scientists claims are a sign of Martian plant life. This image consists of an MGS photo superimposed on a Hubble photo of Mars; however, the location of the former is shown indicatively rather than accurately. Credit: ESA/Medialab.

The location and shape of the spots poses challenges for a non-biological explanation. (A) Spots develop on the dark dunes rather than on the stony soil nearby. (B) Spots are also elliptical in shape or even (C) fan-shaped. Credit: NASA/JPL/Malin Space Science Systems.

The possibility of life on Mars was discussed as early as the mid-eighteenth century by Johann Lambert who proposed that the vegetation was red – an idea later endorsed by Flammarion. By the second half of the 19th century, some observers such as E. Liais began to suspect that the seasonal variations in Martian surface features might be due to the alternate growth and recession of vast tracts of vegetation. This thesis was embraced by Lowell as part of his grand scheme of intelligently constructed canals. However, as it gradually became clear that the environment of Mars was probably too hostile for advanced forms of animal or plant life, astronomers in the pre-Space Age decades of the twentieth century came to suspect that, at most, lowly, lichen-like vegetation would be found. As late as the spring of 1956, Gerard Kuiper, using the 82-in reflector at the McDonald Observatory, noted a "touch of moss green" in some of the equatorial regions. Such reports prompted a search for the spectroscopic signature of chlorophyll which, for a brief period in the late 1950s, through the work of Sinton, appeared to have been successful. In the USSR, at the same time, Gavriil Tikov was similarly engaged in an effort to find traces of Martian plant life spectroscopically.