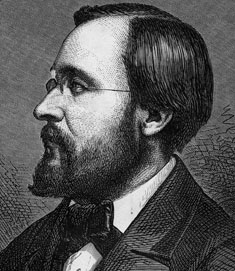 Emmanuel Liais was a French astronomer who spent much of his life in Brazil, as Director of the observatory of Rio de Janeiro. In 1860, he suggested that the dark regions on Mars, instead of being oceans and seas, as was widely believed at the time, might be tracts of vegetation (see Mars, vegetation). The summer melt-water from the poles, he believed, was irrigating the soil at lower latitudes and causing the dormant plant life there to rejuvenate and spread.