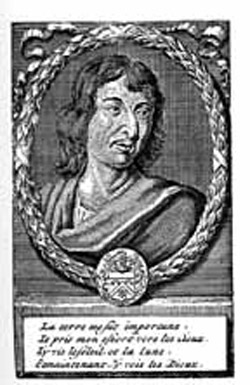 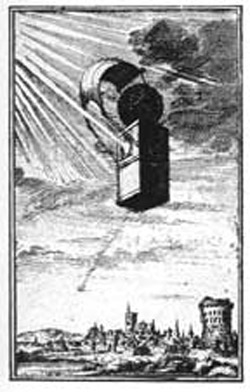 One of the unusual space vehicles described by de Bergerac.

Cyrano de Bergerac was a French author and prolific duelist (most of the duels being fought on account of his extraordinarily large nose). His enthusiasm for pluralism is evident in his Histoire Comique des Etats et Empires de la Lune et du Soleil (A Comical History of the States and Empires of the Sun and the Moon), published posthumously in 1656. This inventive fantasy sees the reappearance of Godwin's Domingo Gonsales and probably helped inspire Swift's Gulliver and Voltaire's Micromegas. It also introduced several novel ideas for aerial and space propulsion, notably the rocket and (as Arthur C. Clarke has pointed out) the ramjet.