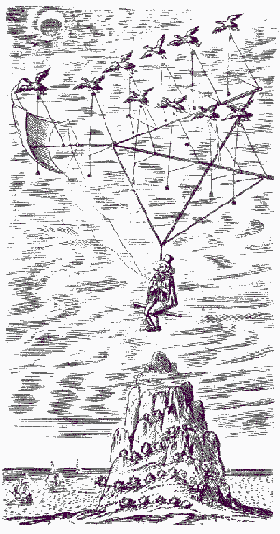 Illustration from The Man in the Moone.

Francis Godwin was a Bishop of Hereford and author of what is arguably the first science fiction story to be written in the English language. In The Man in the Moone, published posthumously in 1638, Godwin conveys his astronaut, Domingo Gonsales, to the Moon in a chariot towed by trained geese. (Gonsales had intended a less ambitious flight but discovers that the geese are in the habit of migrating a little further than ornithologists had supposed!) In keeping with both popular and scientific opinion of his day, Godwin accepted the notion that air filled the space between worlds and that the Moon was inhabited by intelligent human beings. He may, however, have been the first to hint at the possibility of weightlessness, as this passage from The Man in the Moone reveals:

It was now the season that these Birds were wont to take their flight away, as our Cuckoes and swallowes doe in Spaine towards the Autumne. They (as after I perceived) mindfull of their usuall voyage, even as I began to settle my selfe for the taking of them in, as it were with one consent, rose up, and having no other place higher to make toward, to my unspeakeable feare and amazement strooke bolt upright, and never did linne towring upward, and still upward, for the space, as I might guesse, of one whole hower, toward the end of which time, mee thought I might perceive them to labour lesse and lesse; till at length, O incredible thing, they forbare moving any thing at al ! and yet remained unmoveable, as stedfastly, as if they had beene upon so many perches; the Lines slacked; neither I, nor the Engine moved at all, but abode still as having no manner of weight.

I found then by this Experience that which no Philosopher ever dreamed of, to wit, that those things which wee call heavie, do not sinke toward the Center of the Earth, as their naturall place, but as drawen by a secret property of the Globe of the Earth, or rather some thing within the same, in like sort as the Loadstone draweth Iron, being within the compass of the beames attractive.