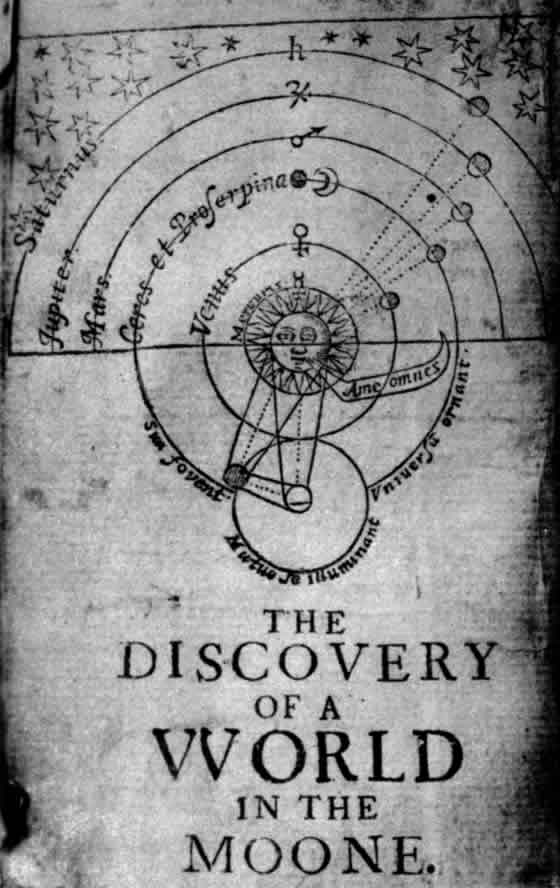 John Wilkins was the brother-in-law of Oliver Cromwell and Oxford graduate who became Master of Trinity College, Cambridge, and eventually Bishop of Chester. Wilkins was among the new wave of thinkers who voiced freely their opinions on the implications of the Copernican revolution.

As a young author Wilkins was one of several men, including Johannes Kepler, who, following Galileo's telescopic observations, were inspired to speculate about the possibility of lunar life and of traveling to the Moon. He expounded upon the former in the first edition of his book The Discovery of a World in the Moone, or, A Discourse Tending to Prove That 'Tis Probable There May Be Another Habitable World in That Planet,1 published anonymously in 1638. Two years later, having read Francis Godwin's contemporaneous fantasy about a lunar journey, he was encouraged to set down his own thoughts on such a possibility in the third edition of The Discovery.

Wilkins saw no reason why men should not one day invent a means of transport – a "flying chariot," as he called it – which could reach the Moon. He even suggested that colonies might be established there, a proposal which, not surprisingly, drew derogatory comments from foreign writers about British imperialism. Among those who poured scorn on his ideas was the orator and sermonizer, Robert South, who suggested that Wilkes had ambitions to obtain a bishopric on the Moon. About the same time, Samuel Butler penned his comic poem "The Elephant in the Moon," about a lunar beast discovered by astronomers which turns out to be a mouse inside their telescope. However, Wilkins's ideas proved highly influential. He discussed them at weekly meetings of the Philosophical Society of Oxford with other savants, including Robert Boyle, Christopher Wren, and Samuel Pepys – a group which was eventually chartered and became the Royal Society of London – and echoes of them are to be found throughout later seventeenth century writings on pluralism.