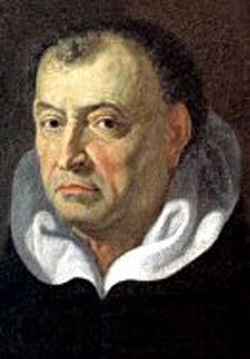 Tommaso Campanella was an Italian poet and philosopher who wrote extensively in favor of pluralism following the telescopic discoveries of Galileo. His Apologia pro Galileo was the main source used by John Wilkins in The Discovery of a World in the Moone. His The City of the Sun, originally written in Italian in 1602, just after Campanella was condemned to life imprisonment for sedition and heresy, is an important utopian tale that may have influenced Bacon's New Atlantis. In it, Campanella presents an early vision of life inside the Sun.

Campanella was born at Stilo in Calabria, and studied at Naples and Cosenza. He entered the Dominican order when he was 15 and soon became doubtful of the prevailing scholastic philosophy by the writings of Telesius. The results of his first studies were given in his Philosophia Sensibus Demonstrata, etc (Naples, 1591), which contained a defense of Telesius. His controversial views made him unpopular with the orthodox monks and schoolmen and he was forced to flee Naples to Rome, and then to Florence, Venice, Padua, and Bologna. He returned to Calabria in 1599, but being suspected of involvement in a political conspiracy, he was seized and confined in a Neapolitan dungeon for 27 years, tried five times and repeatedly tortured, accused of heresy, and declared the author of a book that had been published 30 years before he was born.

In 1626 Pope Urban VIII had him brought to the prison of the Inquisition in Rome, and three years later set him free with an annual pension. After being again persecuted by the Spanish government, Campanella went to Paris, where he was well received by Louis XIII and Richelieu. He died in the Dominican monastery of St. Honoré, near Paris.

More than 40 works on various subjects (several of which are lost) were written by Campanella during his imprisonment. His philosophical views were characteristic of the transition from the 16th to the 17th century. In his theory of perception, which starts from the external sense ("sensum solum sapere"), he is a forerunner of the empiric and sensualist school; in his doctrine of the inner sense (which is the condition of the outer) he finds his refuge from skepticism; and his conviction that we possess in our consciousness of self an impregnable certainty of our own existence points forward to Descartes and Leibniz. His aim was to reconcile the theology of Aquinas with the natural philosophy of Telesius by means of his metaphysics, and to prove that all worldly powers should serve the Church, and all secular science should be subservient to religion. His De Monarchia Discursus us a work of great power and value, comprising a sketch of the political world of Campanella's time, with special reference to Spain. It was translated into English during Cromwell's Protectorate. Of his other works the most noteworthy are Astrologicorum, Libri VII (1617), De Sensu Rerum and Magia (1620), Philosophia Epilogistica Realis (1623), Universalis Philosophiae, Partes III (1638), Philosophiae Rationalis et Realis, Partes V (1638), and Civitas Solis (1623), an imitation of Plato's Republic.