speculation about life on the Sun 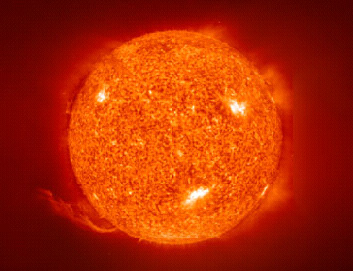 Before the nature of the Sun was properly understood, there was no shortage of speculation that it might be inhabited. Lucian played with the idea, almost two thousand years ago, in his True History, while in the early seventeenth century Campanella built an entire utopian narrative around it in his The City of the Sun. More remarkably, as late as 1795, the distinguished astronomer William Herschel maintained that the Sun was essentially a large planet with a solid surface, surrounded by two layers of clouds. An opaque lower layer shielded the solar inhabitants from the heat and light of the glowing upper layer which he thought was similar in nature to Earth's aurora though on a grander scale. Wrote Herschel:1

The Sun ... appears to be nothing else than a very eminent, large, and lucid planet ... Its similarity to the other globes of the solar system ... leads us to suppose that it is most probably ... inhabited ... by beings whose organs are adapted to the peculiar circumstances of that vast globe.

Among others who shared this belief in the Sun as a life-bearing planet were François Arago and David Brewster. In fact, such weight did Herschel's views carry that serious proponents of an inhabited Sun were still to be found in the 1860s.

In 1951, an elderly German engineer concluded that, because sunspots are dark they were holes leading to the Sun's interior, where life could live at the Sun's core. His name was G. Bueren (1881?-1954) and he lived in Osnabruck. Bueren made a public wager that scientists could not prove life did not live in the Sun. However, he was adjudged to have lost the bet and was forced by a German court to make payment to the Astronomische Gesellschaft (AG). After Bueren's death, his estate owed the AG money, which was finally used in the form of a "Bueren Fund" legally established for training young German students of Astronomy. This bitter-sweet story was written up by Ernst Opik in his "Is the Sun Habitable? An Astronomical Law-suit, a prize and a tragedy."2

Oddly, Bueren may have been correct – just a bit premature! In 5 billion years or so, Earth will enter a gaseous holocaust caused by the Sun becoming a red giant. But, according to Rybicki and Denis,3 Earth will survive intact, not evaporating inside the Sun, and eventually will be ejected from the Sun. So, subsurface, heat-tolerant microbial life-forms just may one day live inside the Sun!

More recently, with the realization that alien life might run along completely different lines to the terrestrial variety, scientists and science writers have revisited the possibility of organisms living inside or on the surface of stars. Speculations about plasma-based life inhabiting the interior of the Sun or other stars have been made by A. D. Maude4 and later elaborated by Feinberg and Shapiro5.

In 1959, Arthur C. Clarke wrote a short story called "From Out of the Sun" about astronomers at a solar observatory on Mercury who make an astonishing discovery during a huge solar flare:

We were looking at what seemed to be a translucent oval, its interior laced with a network of almost invisible lines. Where the lines crossed there appeared to be tiny, pulsing nodes of light... What we were seeing was impossible, yet the evidence was there before our eyes. We were looking at life, where no life could exist. The eruption had hurled the thing out of its normal environment, deep down in the flaming atmosphere of the sun...

Other modern science fiction writers to explore the theme of life in the Sun and other stars are Hal Clement in "Proof" (Clement's first published story in the June 1942 issue of Astounding magazine), David Brin with his Sundiver 6 (1980), and Robert Forward in his novels about a technological civilization on a neutron star (see neutron star, life on).

In his 1994 novel Ring, Stephen Baxter writes about "photino birds" that live inside stars and can fly between them:

She descended into the Sun, through the ... flock of photino birds. The birds soared past and around her, tiny planets of dark matter racing through their tight solar orbits. The birds continually nudged toward or away from each other, like a horde of satellites maneuvering for docking. Many of the transient clusters they formed ... seemed immensely complex. There had to be a reason for all this activity...