life on a neutron star 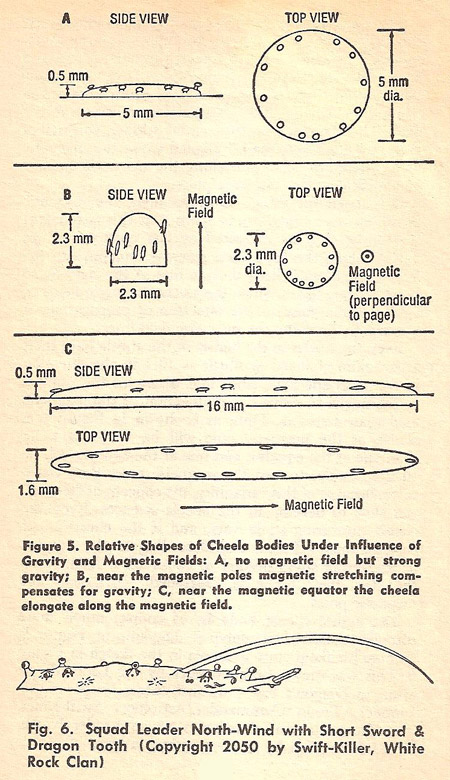 Life forms on a neutron star was an imaginative and tongue-in-cheek suggestion by the radio astronomer Frank Drake,1 later developed and elaborated into two science fiction novels, Dragon's Egg and Starquake by Robert Forward. In order to convey the idea that a neutron star was more like a planet than a normal star, Drake speculated that life might exist on its solid surface. The creatures he imagined were submicroscopic and made of tightly packed nuclei, rather than ordinary atoms, bound together as "nuclear molecules". Whether such bizarre molecules could exist and combine in ways complex enough to give rise to life is not known. However, if neutron star creatures did exist they would live very rapidly. Nuclear reactions happen much faster than the chemical variety, so that any life-forms on a neutron star would evolve and live their lives a million times more quickly than human beings.

The dominant animal life forms on the star are called cheela. Since they are intelligent, the cheela have roughly the same complexity as humans. That implies that they have the same number of nuclei, so it is not surprising that they weigh about the same as humans – 70 kg. The cheela are flat, amoeba-type creatures about 2.5 mm in radius and 0.5 mm high, with a density of 7 million g/cc.

The atomic nuclei that make up the cheela do not have captive electron clouds to keep them isolated from each other, but instead share a "sea" of free electrons. Because of the resulting close proximity of the nuclei, it is as easy for cheela nuclei to exchange neutrons as it is for human atoms to exchange electrons. The nuclei couple into "nuclear bonded molecules" by neutron exchange. Since the cheela use nuclear coupling instead of molecular coupling in their bodies, their rate of living is about one million times that of humans.

Cheela can form crystalline "bones" when needed, but normally keep a more flexible structure and can flow around and into instruments to operate them. Because of the high gravitational field, cheela do not have strength to extend themselves more than a few mm above the crust.