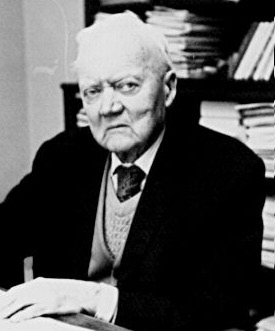 Ernst Öpik was an Estonian-born astronomer who, in 1950, put forward arguments for the existence of heavy cratering (later substantiated by the Mariner probes) and vegetation on Mars. Referring to the yellowish clouds that occasionally appeared to move across the surface of Mars and to settle on the dark regions, he suggested that the dark shading tended to reassert itself after a couple of weeks because the lighter dust had been shaken off or overgrown by plants. William Sinton's citing of this idea at a symposium of the National Academy of Sciences drew the dry response from Harold Urey that he saw no reason why extraterrestrial plants should not have muscles and be able to dust themselves off.

Öpik was the first to describe the process by which meteors burn up in the atmosphere and to propose the existence of a vast cloud of frozen cometary nuclei at about 60,000 AU (which later became known as the Oort Cloud). He was also the first, in 1915, to compute the density of a star made of degenerate matter (the white dwarf 40 Eridani B) and the first, in 1922, to determine accurately the distance of an extragalactic object (the Andromeda Galaxy). He made a number of contributions to the theory of stellar structure and evolution, showing the significance of nonuniform chemical composition in stellar interiors, and explaining the structure of giant stars. Several of his contributions were not accepted until rediscovered by others much later.

Öpik wrote numerous articles, many of which were published in the Irish Astronomical Journal, on subjects ranging from life and intelligence in the Universe1, 2, 3 to the possibility of interstellar travel4, 5 He was educated at Moscow Imperial University and after four years at Moscow Observatory became director of the Astronomy Department at Tashkent. From 1921 to 1944 he was associate professor at Tartu University, and from 1930 to 1934 a visiting scientist at Harvard College Observatory. A former volunteer in the White Russian Army, he vehemently opposed the Bolshevik Revolution and, when the Soviet occupation of Estonia was imminent, moved first to Hamburg and then, in 1948, to Armagh Observatory in Northern Ireland, where he remained until 1981. Öpik's lifelong interest in minor planets was rewarded by the naming of an asteroid after him.