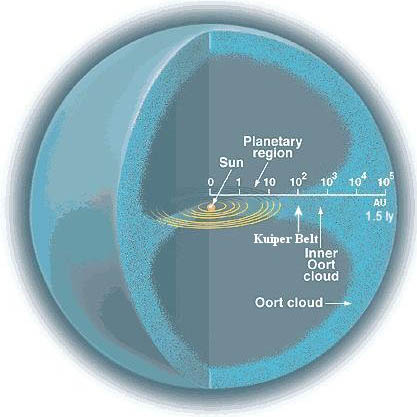 The Oort Cloud is a vast reservoir of ice dwarfs, or deep-frozen cometary nuclei, which marks the material outer limit of the solar system and the maximum extent of the Sun's gravitational influence. It is named after Jan Oort, though Ernst Öpik was the first to postulate its existence.

Studies of the orbits of long-period comets, which are believed to originate in the Oort Cloud, suggest that the Cloud extends out from a heliocentric distance of about 20,000 to 100,000 astronomical units (AU), with a peak density of objects at 44,000 AU from the Sun. A variety of gravitational influences are thought to play a part in perturbing Oort Cloud objects so that their new orbits carry them into the inner Solar System. These include passing stars, giant molecular clouds,1 and tidal forces due to the galactic bulge of the Milky Way.2, 3 A star that approaches the Sun to within roughly the distance of the Oort Cloud might increase the rate of comet passages near the Earth by a factor of 300 for 2 to 3 million years, so greatly increasing the risk of a catastrophic impact. Measurements of the accumulation in ocean sediments of interplanetary dust, most of which is thought to come from comets, suggests a sharp rise in the incidence of comets at the end of the Eocene epoch, about 36 million years ago. The discovery of several impact craters dating from this time and the occurrence of a moderate biological extinction in the late Eocene may be no coincidence. Several comet strikes may have been to blame. It is interesting to speculate how much the direction of evolution on Earth, and that on other life-bearing worlds in space, has been influenced indirectly by the random motion of stars.

The origin of the Oort Cloud is another unresolved problem. It seems clear that the Oort objects could not have formed in their present locations because the material at those distances would have been too sparse to condense. The only solution that makes sense is that these icy bodies coalesced in the vicinity of Jupiter, Saturn, Uranus, and Neptune, and were subsequently hurled into the Oort Cloud by gravity-assists from the giant planets. If it were the case that the Oort Cloud comets originated at a wide range of distances, from the orbit of Jupiter to that of Neptune, and therefore at a wide range of ambient temperatures, this would explain the differences in composition observed in long-period comets. Recent work suggests that the Oort Cloud may even contain a small percentage of asteroids, made of rock rather than predominantly of ice.4