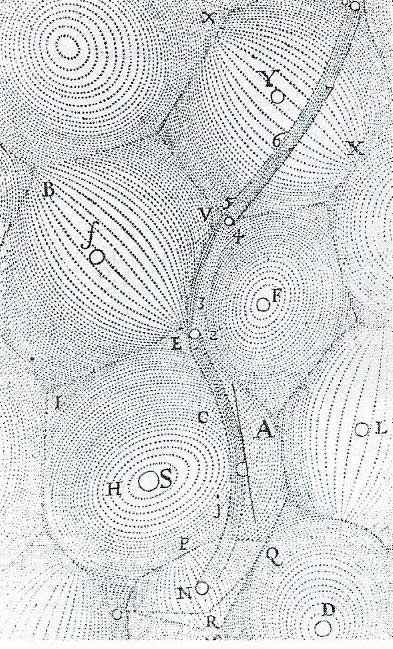 Descartes' idea of the universe rejected the theory of the existence of a vacuum and held matter filling the universe was perpetually moving in vortices with stars at their centers. Some stars became planets with orbits in the vortex of another star. Comets wound their way between and across vortices, as in this engraving..

René Descartes was an immensely influential French philosopher and mathematician, regarded as one of the founders of modern philosophy and modern mathematics. Born in La Haye (now named Descartes after its most famous son), Indre-et-Loire, he studied law at the University of Poitiers but never practiced it, served in the military for a while (1618–1619), and then lived in Holland for more than 20 years (1625–1649) where he did the bulk of his great work. He established a rationalist, a priorist school of philosophy known as Cartesianism and upheld a strict dualism: there were no causal relationships between physical and mental substances. In biology, his views were mechanistic; he regarded as animals as nothing more than complex machines.

Descartes died of pneumonia in Stockholm, where he had been invited to serve as tutor to the energetic 19-year-old Queen Christina of Sweden. Accustomed to working in a warm bed till noon, he was shocked into a rapid decline by having to teach philosophy at 5 am in a freezing library. Seventeen years after his death, the Roman Catholic Church placed his works on the Index of Prohibited Books.

In his Meditations on First Philosophy, Descartes tried to establish what can be known as true beyond doubt. His tool was methodological skepticism: the assumption that any idea that can be doubted is false. He gives the example of dreaming: in a dream, one senses things that seem to be real, but that don't actually exist. Thus, the data of the senses can't be fully trusted. Then again, he mused, perhaps there is an "evil genius" – a supremely powerful and devious being who sets out to prevent anyone from knowing the true nature of reality. Given these possibilities, what is it that one can know for certain? Descartes argues that if "I" am being deceived, then surely "I" must exist – the statement famously referred to as cogito ergo sum ("I think, therefore I am"), though these words don't actually appear anywhere in the Meditations. Descartes concludes that he can be certain that he exists. But in what form? If the senses are unreliable, Descartes reasons, all he can say for sure is that he is a thinking thing. He then proceeds to build a system of knowledge, discarding perception as unreliable and instead admitting only deduction as a method. Halfway through the Meditations he also claims to prove the existence of a benevolent God, who, being benevolent, has provided him with a working mind and sensory system, and who cannot desire to deceive him, and thus, finally, he establishes the possibility of acquiring knowledge about the world based on deduction and perception.

In mathematics, Descartes is important for his discovery of analytical geometry. Up to Descartes' time, geometry, dealing with lines and shapes, and algebra, dealing with numbers, were regarded as completely independent aspects of mathematics. Descartes showed how almost all problems in geometry can be translated into problems in algebra, by regarding them as questions asking for the length of a line segment, and using a coordinate system to describe the problem. Descartes' theory provided the basis for the calculus, developed by Isaac Newton and Gottfried Leibniz, and thus for much of modern mathematics. This is particularly amazing when you consider that Descartes intended it merely as an example to support his Discours de la méthode pour bien conduire sa raison, et chercher la verité dans les sciences (Discourse on the Method to Rightly Conduct the Reason and Search for the Truth in Sciences), better known under the shortened title Discours de la méthode).

In science, Descartes proposed a revised form of atomism and so helped pave the way for the expansion of pluralism to include the planetary systems of other stars. In Descartes' cosmological worldview, not only are atoms the fundamental essence of nature but they form vortices, analogous to the solar system, around every star. For religious reasons, Descartes avoided speculating on whether or not these vortices would give rise to inhabited extrasolar worlds. His reluctance to enter the pluralist debate is evident in a letter he wrote to his compatriot, Pierre Chanut:

Others who followed him, however, and accepted his vortex theory, such as Pierre Borel and Bernard le Bovier de Fontanelle, were not so restrained in drawing far-reaching conclusions about the ubiquity of extraterrestrial life.