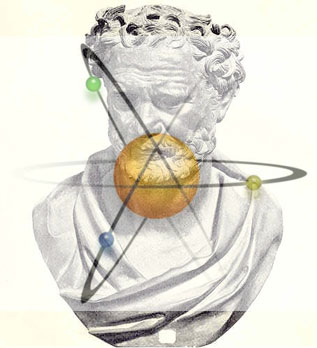 Atomism is the belief that all matter consists of atoms – minute indestructible particles, homogeneous in substance but varied in shape. Atomism was also the earliest cosmological world view to espouse pluralism and the existence of extraterrestrial life. Although it may appear to be an intellectual precursor of the atomic theory of matter, first espoused by John Dalton in the nineteenth century, it is, really, entirely distinct in being a purely philosophical movement without empirical or experimental basis.

Developed in Greece in the fourth and fifth centuries BC by Leucippus and Democritus, and later by Epicurus, Metrodorus, and Lucretius, atomism taught that the cosmos consists of nothing but identical, indestructible particles moving randomly in a void. It is a philosophical school of thought and should not be confused with the much later atomic theory of John Dalton or the modern physics of atoms. Located somewhere in between ancient atomism and atomic theory was the fundamental theory of matter espoused by Roger Boscovich.

Starting from the assumption that the Earth had come about by the chance association of atoms, it was a natural step to postulate that other Earths and other life-forms had originated elsewhere in the same way. However, the atomists considered that these other worlds, held to exist both simultaneously and in temporal succession, lay within their own self-contained universes – distinct kosmoi (see cosmos) which were entirely separate and inaccessible from our own. It is important to recognize that this was a purely philosophical doctrine which made no appeal to empirical evidence or observation and is therefore completely distinct from post-Copernican notions of other possibly inhabited worlds in the Solar System and planets circling around other stars.

The atomist doctrine, as expressed in the writings of Lucretius, was eventually rediscovered in medieval Europe where, once again, it clashed with the one-world system of Aristotle.