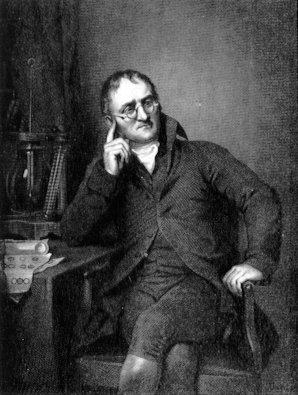 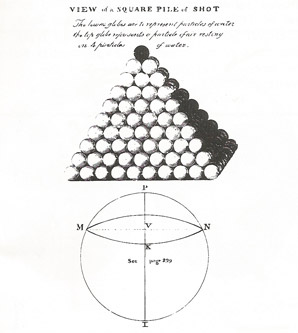 "A particle of gas pressing on the surface of water is analogous to a single shot pressing upon the summit of a square pile of them", John Dalton, 1805.

Pages from John Dalton's book A New System of Chemical Philosophy (Manchester 1808). Top left are the symbols for some of Dalton's atoms (though not all correspond with elements as we know understand them). Below these are the symbols for compounds made of two or more atoms. The key is on the right-hand page. Notice that nitrogen is called "azote" (a name coined by Lavoisier).

John Dalton was an English chemist and physicist best known for his atomic theory (see below). Dalton was born of a Quaker family at Eaglesfield, a small village in the English Lake District. As a young boy, he worked in the fields with his older brother, and helped his father in the shop where they wove cloth. In 1776, when only ten years old, he entered the service of Elihu Robinson, a wealthy Quaker, who taught him mathematics. In 1781, after a brief spell of teaching in the village school, he joined his brother who was a master at a school in Kendal.

It was during this period that Dalton started a journal of meteorological observations which he kept up for the remainder of his life. He also collected butterflies and amassed a vast number of dried plants.

In 1793 he moved to Manchester and, in the same year, published Meteorological Observations in which he suggested that the processes of evaporation and condensation were not chemical changes of state but rather changes in the physical form of water. These ideas laid the foundations for his theory that all matter is composed of discrete 'atoms'. At first after he moved to Manchester he taught mathematics and natural philosophy at New College, and began observing the behavior of gases, but after six years he resigned. Thereafter he devoted his life to research which he financed by giving private tuition.

Philosophers of former civilizations, in particular the Greek thinkers Leucippus, Democritus, and Epicurus, had notions that all matter was made of some kind of elementary particles or atoms. So the concept of atoms was by no means new, but it fell to Dalton to develop the idea. By defining in more detail what he understood by atoms, Dalton cleared the way for those chemists who followed him to gain a better idea of the constitution of chemical substances and of the mechanism of chemical reactions.

Dalton included in his theory some important new concepts. He said that the atoms of any one element are identical in all respects and in particular they have exactly the same mass. Furthermore, different elements have atoms of different mass, the mass of its atoms being a characteristic of each element. Dalton also stated that when chemical combination occurs, small whole numbers of atoms join together.

Except for the slight modification which became necessary when isotopes were discovered, this theory is still accepted today. The various points are, however, more familiar as the basic chemical laws of conservation of mass, constant composition, and multiple proportions.

It was during the third decade of the nineteenth century that Dalton arrived at his atomic theory. At that time it was virtually impossible to make accurate measurements because the apparatus available was still quite primitive. It is all the more remarkable, therefore, that Dalton's theory has withstood the test of time. Although he carried out a whole series of experiments to test the various parts of his theory, the experimental errors involved were so large that he could not claim to have proved it conclusively.

Another valuable contribution which Dalton made to chemistry was his idea for representing chemical compounds visually. A distinctive circular symbol was used to denote the atoms of each element – hydrogen was a circle with a dot in the middle, while a circle with one vertical line through it denoted a nitrogen atom.

When Dalton died in 1844, more than 400,000 people viewed his body as it lay in state. As his final experiment, he asked that an autopsy be performed to find out the cause of his color-blindness. This proved that the color-blindness was not caused by a problem with his eyes, but with his perception – the way his brain worked. The red-green type of color blindness from which he suffered is still known as Daltonism.