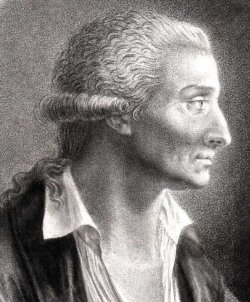 Antoine Lavoisier was a French chemist who is widely regarded as the founder of modern chemistry. His insistence on careful experimentation and accurate measurements of the amounts of substances led to the overthrow of the ancient phlogiston theory. He named both oxygen and hydrogen and showed how they combined to form water. In collaboration with Claude Berthollet and others, he published Methods of Chemical Nomenclature (1787), which laid down the modern method of naming substances. He also helped to establish the metric system of units.

Lavoisier, who was born in Paris, was to have become a lawyer and he did in fact study law, although he was more inclined to study science. When he was only 22 years old he received a prize from the French Academy of Science for the invention of a new system of street lighting for Paris which was far superior to the existing one. On that occasion he kept himself locked up in a darkened room for one and a half months, so that his eyes would become easily able to distinguish the various intensities of the different forms of lighting systems.

From that time on his life took on a double role: in order to earn a living he began working as a tax collector, which made him a lot of enemies despite the popular reforms which he advised the government to make. At the same time all his spare moments were devoted to scientific studies and especially to chemistry. he made important discoveries about the composition of air, water, and other substances. He was also the first to formulate an exact theory for combustion.

In his famous book An Elementary Treatise of Chemistry (1789) he demonstrated the inaccuracies of many old theories and advised the use of precise scientific terms in the place of words and expressions which were both antiquated and inexact.


How Lavoisier disproved an old theory

In the time of Lavoisier it was still believed that water could, by evaporation, be turned partly into earth or sand. The theory seemed to be confirmed by practical experiments because, when water was boiled until it had completely evaporated, there was always some solid residue left in the vessel that had been used for the experiment.

Lavoisier carefully redid his experiment, but he took care to use only scrupulously clean vessels. He used pure rainwater, which he boiled in an apparatus that allowed the steam to be condensed and to fall back into the water. Thus it was always the same amount of the same water that continued to boil. He kept this experiment going continuously for many days. At the end of this period Lavoisier examined the water and found solid traces of a foreign substance. He then weighed the foreign material, the water, and the container.

One of the most important discoveries of Lavoisier was the law of conservation of masses. This law states that the sum of the weight of two chemical substances when combined is equal to the weight of the newly-formed compound.

If we combine 2 g of hydrogen with 16 g of oxygen we get exactly 18 (2 + 16) grams of water. In the same way, if 35 g of chlorine are combined with 23 g of sodium, we would obtain 58 g of sodium chloride (table salt). This discovery paved the way for the modern theory of atoms, as first espoused by John Dalton.

Lavoisier discovered his law by conducting yet another experiment to disprove an old theory. It had previously been observed that when a metal became calcined (that is, when it was reduced to a powder by burning) it increased both in volume and in weight. Lavoisier showed that this happened only because the metal had absorbed some of the air during calcination. It had, in fact, been oxidized, and the increase in weight of the metal corresponded to the added weight of oxygen from the air.

In May 1794 the Tribunal of the French Revolution condemned Lavoisier to death. He had been accused of having plotted against the government and of having embezzled large sums of money which should have gone to the State. Both the accusations and the evidence against him were false, as were the statements of the witnesses. There was much hatred against him which derived from envy of his prosperity and his privileged position at Court.

Some of his friends intervened on his behalf, trying to impress on the judges his great merits and the advantages that his discoveries had gained for France. Any defense, however, during that period of terror was quite hopeless – the president of the Tribunal declared: "The Republic does not need any scientists!" – and Lavoisier was guillotined.