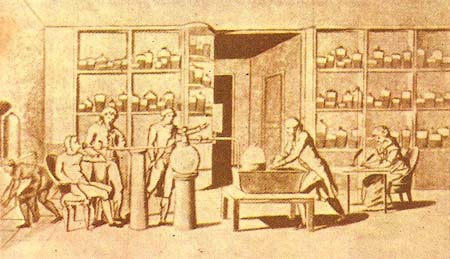 Fig 1. Lavoisier carrying out an experiment on combustion in the human body (from an old print).

Fig 2. Experiment to show decrease in pressure of air as a result of combustion.

Fig 3. Experiment to increase in mass as a result of combustion. 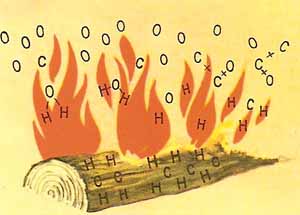 Fig 4. Wood burns because the carbon and hydrogen that are its principal components combine with the oxygen in the air. 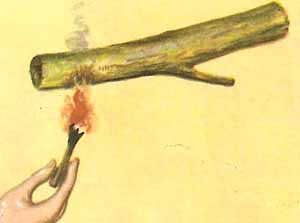 Fig 5. The fuel must be heated to the ignition point to be able to burn. 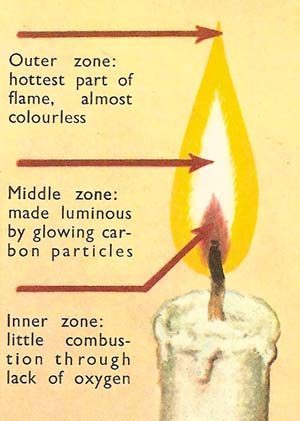 Combustion is the rapid oxidation of fuel in which heat and usually light are produced. In slow combustion (e.g., a glowing charcoal fire) the reaction may be heterogeneous, the solid fuel reacting directly with gaseous oxygen; more commonly, the fuel is first volatilized, and combustion occurs in the gas phase (a flame is such a combustion zone, its luminance being due to excited particles, molecules, and ions.

Combustion air is air that provides the necessary oxygen for complete, clean combustion and maximum heating value. Combustion gases are the gaseous by-products of combustion.

In the 17th and 18th centuries combustion was explained by the phlogiston theory, until the French chemist Antoine Lavoisier showed it to be due to combination with oxygen in the air. In fact the oxidizing agent need not be oxygen: it may be another oxidizing gas such as nitric oxide or fluorine, or oxygen-containing solids or liquids such as nitric acid (used in rocket fuels). If the fuel and oxidizer (oxidant) are premixed, as in a Bunsen burner, the combustion is more efficient, and little or no soot is produced. Very rapid combustion occurs in an explosion, when more heat is liberated than can be dissipated, or when a branched chain reaction occurs.

Each combustion reaction has its own ignition temperature below which it cannot take place, e.g., about 400°C for coal. Spontaneous combustion occurs if slow oxidation in large piles of such materials as coal or oily rags raises the temperature to the ignition point.

In rocketry, combustion commonly involves the chemical reaction of a fuel and an oxidizer, but may also may involve the decomposition of a monopropellant or the burning of solid propellants.

What is fire? What makes things burn, and where do the heat and energy come from? It was not until the end of the eighteenth century that the answers to these questions began to be made clear, largely as a result of Lavoisier. He carried out many experiments on the nature of combustion (Fig 1). In one of these, he heated a red powder – mercuric oxide – which he called "red earth." He found that the new substance weighed more than the original mercury; the amount of air in the flask had decreased by one-fifth, and in the air that remained any flame immediately went out, and small animals rapidly suffocated.

From this experiment Lavoisier concluded that in the process of burning the mercury absorbed from the air that part of it that made it possible for animals to breathe and fuel to burn – that is, the gas oxygen, which makes up one-fifth of the air. The part that remains – nitrogen – is a gas which cannot support life or combustion.

When anything burns, the substances taking part in the combustion – fuel and oxygen – combine to form a new substance, such as the mercuric oxide formed in Lavoisier's experiment.


The nature of fire

Fire is the visible sign of a chemical reaction taking place between a fuel and the oxygen of the air. In such a reaction, two substances combine to form one or more new substances. Common fuels (which include wood, coal, and gasoline) are made up largely of carbon and hydrogen. When they burn, oxygen combines with the carbon to form carbon dioxide, and with the hydrogen to form water vapor.

Any chemical reaction will only take place if certain conditions are present. For the chemical reaction that is combustion, the necessary condition is heat. For a fuel to burn, it must first be brought to a certain temperature, which is called the ignition point. The combustion itself then produces enough heat (if sufficient oxygen is present) to keep the fire going.

In rapid combustion, heat and light are given off. In slow or latent combustion, on the other hand, oxidation takes place so slowly that the heat developed by the reaction is dispersed as rapidly as it is formed. In these conditions the fuel does not catch fire, and there is no flame.

An example of slow combustion is that which takes place in our bodies. The substances we eat, which give us energy and help build new cells, are partly "burned" by the oxygen that the blood absorbs from the lungs. During this process of slow combustion, energy is given off in the form of heat.

Suppose we fasten a lighted candle to a piece of cork, and float the cork on water. If we now place a large glass jar over the candle in such a way that the edge of the jar is below the surface of the water, the candle will go on burning for a short time, then flicker and go out (Fig 2). At the same time the water will rise up inside the jar, and if we mark on the jar the old and new levels of the water we' find that the water has risen to fill one-fifth of the jar. This experiment shows that:

1. The candle, when covered by the jar, at first continues to burn, because the flame is fed by the oxygen in the air enclosed in the jar.

2. As the oxygen is used up, the water is forced upwards in the jar by the pressure of the outside atmosphere, taking the place of the oxygen.

3. At last only nitrogen, which does not support combustion, is left, and the candle goes out. The amount of water that has risen into the jar shows the amount of oxygen that has been used up.

When a substance burns, the resulting materials (including ash, gases, and smoke) weigh more than the original substance, since the weight of the oxygen used in the combustion has been added to that of the original fuel. We can show the truth of this by another experiment.

When a candle burns, the products of combustion are carbon dioxide and water. There is a substance, caustic soda, that has the property of absorbing both of these. Suppose we put some caustic soda in a glass tube arranged as shown in the diagram, light a candle under it, and put the whole apparatus on a balance, with weights on the other side to keep the balance arm level. Soon the balance will start to go down on the side of the candle; the weight on that side has been increased by the weight of the oxygen taken from the air (Fig 3).