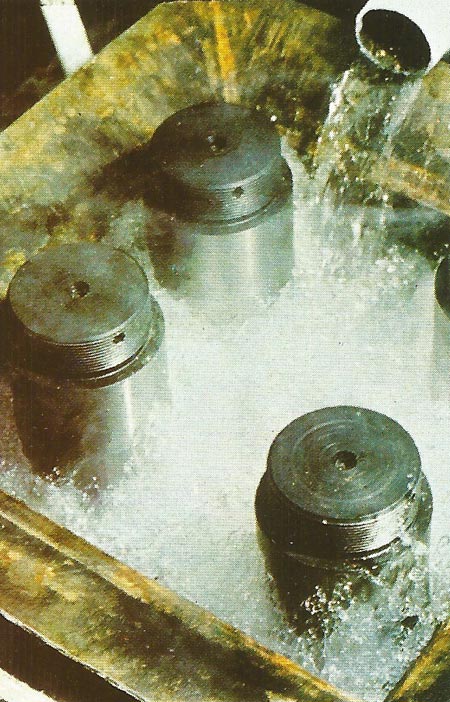 Liquid air can be produced by cooling air, which is normally gaseous at room temperature. During the change to a liquid state, latent heat of condensation is released. To cut down heat input the liquid is kept in a Dewar vacuum flask. But if it is poured out of this flask, heat from the surroundings makes the liquid boil rapidly. Large amounts of gas are generated during this process and cause a fog of condensed water vapor to form above the liquid.

Air is the mixture of gases that exists above Earth's surface. Collectively, air is synonymous with atmosphere. Its composition varies with altitude, from place to place on the surface, and over time due to natural and human-caused processes.


Discovery of the composition of air

The true nature and composition of air has only been elucidated during the past two and a half centuries. For more than two thousand years before, little progress was made in the subject. Certainly there is no recorded evidence of experiments being carried out in this period to test the few theories which were current. The alchemists were so intent upon their search for a means of making gold from base metals that unprofitable and theoretical aspects of chemistry like this did not receive their attention.


In the 5th century BC, the Greek philosopher Empedocles suggested that all things were composed of one of more of the four ultimate roots or elements – earth, air, fire, and water. Each of the four elements represented a combination of two of the four basic properties – earth is dry and cold, water cold and moist, air moist and warm, while fire is warm and dry. This theory was perpetuated and elaborated by Aristotle in the 4th century BC. The theory even allowed one element to be changed into another. Water was transformed into earth when a liquid froze, or into air when a liquid boiled.


Air as a mixture

For some 2,000 years the four-element theory remained unchallenged. Then in 1661, Robert Boyle condemned the idea that all matter was made up of just four elements. However, the notion that all substances consisted of one or more of a much larger number of elements seemed quite probable to him. He envisaged elements which could not be broken down into simpler substances. This was the first positive step toward the atomic theory, though there was a lapse of another 150 years before John Dalton published his theory of atoms and the way they combine.

In 1674 John Mayow (1641–1679) conducted a series of experiments on respiration and combustion. By doing these experiments in a closed vessel, he found that in all instances the volume of the gas was reduced. Furthermore, neither respiration nor combustion would continue indefinitely. Among his experiments, he burnt a candle inside a glass globe. After the candle had gone out he found that camphor would not burn in the residual gas. In another experiment he put a mouse in a vessel sealed with a bladder and the air in the vessel contracted. Although Mayow was not in a position to give a full explanation of his observations his work is important because it paved the way to further discoveries concerning the nature of air. This is the first record of experiments which demonstrated that air contains more than one gas.

Further progress towards a fuller knowledge of the composition of air was delayed for almost a hundred years because of the rise of the phlogiston theory. Formulated by Joachim Becher and embellished by Georg Stahl, this theory provided a most ingenious explanation of combustion and related reactions. Phlogiston was set free when a metal burned and calx (ash) was left behind. Conversely, when a metal was extracted from its ore it was thought that phlogiston had to be added to the ore. The introduction of the balance into chemistry eventually showed that the phlogiston theory was nonsense, but those who believed in it did not give in without a struggle. For instance, it was shown that a metal gains weight on burning, but they explained this by claiming that phlogiston had negative weight.


Discovery of the gases in air

However, by the middle of the 18th century a number of chemists were becoming interested in gases, although at that time all gases were called air. In order to do this they first devised various means for generating, capturing, and analyzing them. Joseph Black introduced mercury as an alternative to water over which many gases may be stored. Joseph Priestley designed various items of apparatus including a pneumatic trough.

The first of the atmospheric gases to be prepared was carbon dioxide, although its discoverer, Joseph Black, called it fixed air. It was in 1755 that he obtained fixed air by heating chalk. Black noticed that as a result of heating, the chalk lost weight.

In the 1770s Antoine Lavoisier, Priestley, and Carl Wilhelm Scheele independently discovered oxygen or fire air and at about the same time it was established that atmospheric air was a mixture of fire air (oxygen) and azote (nitrogen). Azote was the residual gas left over when the fire air had been consumed. They found that oxygen sustained life and burning while nitrogen did not.

Details of Lavoisier's work on oxygen are all the more valuable because he made careful measurements during his experiments. At that time it was unusual to tackle chemical problems quantitatively.

In 1785 Henry Cavendish almost discovered the noble gases while carrying out an accurate analysis of air. He found that he could convert almost all the nitrogen (azote) into potassium nitrate but there was a small residue which would not combine. He carried out the conversion by passing sparks through the gas which was in a vessel containing potassium hydroxide solution. He had first added oxygen to ensure that all the nitrogen could react.

Cavendish's work was forgotten for over 100 years and then in 1892 Lord Rayleigh (William Strutt) noticed that there was a marked difference in the density of the nitrogen made from the atmosphere and that prepared by chemical means. This suggested that the atmospheric nitrogen was contaminated by a denser gas. Further investigations by Lord Rayleigh and William Ramsay led to the discovery between 1894 and 1904 of the family of noble gases. It was found that there is about 0.98% of argon by volume in the air and much smaller amounts of the other noble gases neon, helium, krypton, and xenon.

To find out if there were any other gases in the air, Ramsay had to remove all the gases known to be present (i.e., nitrogen, oxygen, carbon dioxide, and water vapor). First the carbon dioxide was removed by passing the air through a strong solution of potassium hydroxide (caustic potash). Then water vapor was removed with concentrated sulfuric acid. To ensure that the air was dry and free from carbon dioxide, it was necessary to have several bulbs containing each of these absorbents.

Next the oxygen was removed by passing the dry air over red hot copper gauze, the copper being converted to copper (II) oxide. By finding the increase in weight of the copper, the weight of oxygen in a given sample of air was found.

Finally the nitrogen was removed by passing the residual gas over heated magnesium ribbon. Magnesium readily combines with nitrogen to form magnesium nitride (Mg3N2), a yellowish powder. Thus the weight of nitrogen in the sample was found by weighing the tube containing the magnesium ribbon before and after the experiment.

To make sure that all the oxygen and nitrogen had been removed it was necessary to pass the air slowly over the heated copper and magnesium and to have a large area of hot metal with which the gases could react.

After all the other gases had been removed, Ramsay was left with an unreactive gas (argon) which occupied almost 1% of the original volume of air. Further investigation showed that Ramsay had isolated not one gas but a whole family of unreactive gases – the noble gases.

Aeration is bringing air into contact with a fluid by bubbling through or by agitation. Compressed air, providing oxygen to promote bacterial action, is blown into a reagent tank in the treatment of sewage. Aeration is also used in the fermentation and soft drinks industries, as well as in the manufacture of penicillin and other antibiotics

Compressed air is air kept at pressures much higher than that of the atmosphere. It is prepared by pumping air into a reservoir from a pump or compressor, and is used extensively as a source of power for machines such as pneumatic hammers and other moving tools. It is easily transported in metal "bottles" and many factories have their own compressors.