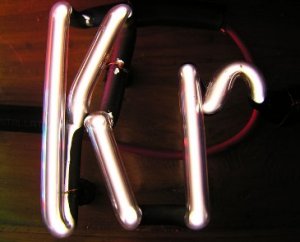 Krypton in a discharge tube displays its green and orange spectral signature. Gaseous krypton is colorless, while solid krypton is white.

Krypton (Kr) is a colorless, odorless, highly unreactive gaseous element. It was discovered by the English chemist Morris W. Travers while working with William Ramsey in London in 1898. Its name comes from the Greek kryptos, meaning 'hidden.'

Krypton is a member of the noble gas family (abundance 1.1 × 10-3%). It is obtained pure by fractional distillation of air. Krypton is used chiefly (with argon) in gas-discharge lamps, fluorescent lights, and electronic flash tubes. The isotope 86Kr has a spectral line used, from 1960 to 1983, as the standard measure of length. One meter is defined as 1,650,763.73 wavelengths of this line.

Krypton-81, the shortest-lived isotope of krypton (half-life 13 seconds), and the shortest-lived isotope used in medicine, can be used to investigation the ventilation of the lungs. The patient breathes a small quantity of the gas, the arrival of which in different parts of the lungs is recorded by a gamma camera. This test is often performed as part of ventilation-perfusion scanning to look for pulmonary emboli.

Krypton forms a limited range of chemical compounds and some clathrates. It combines with fluorine in an electric discharge to give krypton (II) fluoride (KrF2), a highly reactive, odorless crystalline solid, which decomposes slowly at 20°C, is hydrolyzed by water, and forms adducts with Lewis acid fluorides, e.g. KrF2·2SbF5. KrF2 is used as a strong fluorinating agent.