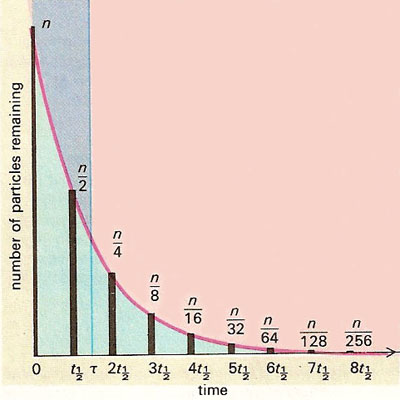 Half-life illustrated in a graph of radioactive decay. After the elapse of each half-life period (t½), only half the number (n) of undisintegrated nuclei remain that were present at the beginning of the period. The average time that elapses before a nucleus disintegrates (τ), starting from the beginning of the process (t=0) is given by: τ = 1.443t½.

The half-life is the time taken for a substance or collection of particles to decay by half of its original amount.

where n0 is the original number and λ is the decay constant, which is equal to 0.693t½.