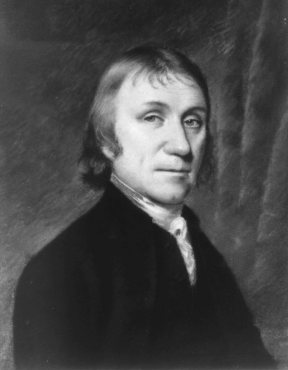 Joseph Priestley was an English chemist and theologian. Encouraged and supported by Benjamin Franklin, he wrote The History and Present State of Electricity (1767). His most important discovery was that of oxygen (1774; named by Lavoisier), whose properties he investigated. However, he never abandoned the phlogiston theory of combustion. He later discovered many other gases – ammonia, carbon monoxide, hydrogen sulfide – and found that green plants require sunlight and give off oxygen. He coined the name rubber. His association in the 1780s with the Lunar Society brought him into contact with scientific figures such as James Watt and Erasmus Darwin.

Priestley's theological writings and activity were important in leading the English Presbyterians into Unitarianism; in fact, he's regarded as a principle architect of the Unitarian Church. Hostile opinion over this and his support of the French Revolution led to his emigration United States (1794).


Priestley: at the crossroads of chemistry and alchemy

Priestley was born near Leeds in 1733 and worked in an era when alchemy was beginning to be discredited and replaced by logical scientific thought. Previously, chemical inquiry had been prompted by the dream of making gold from substances of little value and not much true chemistry was known at the time.

Priestley and his contemporaries Antoine Lavoisier, Joseph Black, Carl Scheele, and Henry Cavendish took part in the amassing of fact and preparation of many new chemical substances. As has happened so often in the history of science, several times their work overlapped and was duplicated when two people produced the same result quite independently. For example, Priestley and Scheele both laid claim to the discovery of the gas now known as oxygen. Many chemical laws were later derived from the bank of chemical knowledge these men help to build and a general picture of chemistry began to evolve.

Priestley is chiefly remembered for his work with gases. Air and its life-giving qualities were his main interest. He experimented with mice, putting them in a confined air space to discover how long they would live. He noted that after a mouse had died a candle wouldn't burn in the air remaining. But if he kept a plant in the "used air" somehow the air seemed to revive and the candle could burn again. This was the first record of the reaction now known as photosynthesis, but Priestley failed to notice that sunlight was the essential factor in the "revival" of air.

In 1774, Priestley made and collected a sample of reasonably pure oxygen by covering some red mercuric oxide with an airtight glass dome and heating it with a burning glass. He noticed that a candle burned very brightly in the new gas and a mouse could survive much longer in a jar of it than it could in the same sized jar of air. Priestley even tried sniffing the gas himself to discover what effect it had. He said he felt full of energy and his lungs felt soothed.

It's surprising with this accumulation of data, Priestley didn't realize that this gas obtained from the red powder was the life-giving component of air. Instead, he clung to the phlogiston theory. He thought that when substances burned, they gave out phlogiston which was absorbed by something else. Things could burn in air because the air was not saturated with phlogiston and could accept some more. When the air became saturated, it would no longer support burning.

In 1772 Priestley published an important paper called "Observation on Different Kinds of Air" describing in it the laboratory preparation of several new gases including nitrous and nitric oxide, nitrogen, nitrogen dioxide, and hydrogen chloride. The insoluble gases he collected over water, and those which were soluble in water, he collected over mercury. His "shelf" used in gas collection is the fore-runner of the beehive shelf used in the laboratory today.