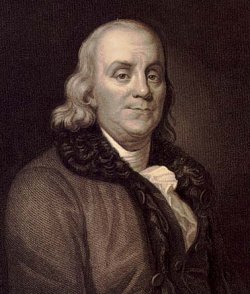 Benjamin Franklin was an American statesman, printer, and scientist who first achieved fame and wealth as publisher of Poor Richard's Almanack (1732).

Although he is chiefly remembered as an American statesman, Benjamin Franklin also made several valuable contributions to scientific knowledge. His famous kite experiment (1752) demonstrated the electric nature of lightning. His inventions included the lightning conductor, the efficient Pennsylvania fire place (Franklin stove), and bifocal lenses. His most significant theoretical contribution was the single-fluid theory of electricity.

Born the fifteenth son of a poor Boston family, he was mainly self taught, although he did attend the local grammar school for a while. At the age of 12 Franklin was apprenticed to a printer and five years later he left his home town for Philadelphia where he continued to practice his trade. By 1729 he had set up his own successful printing house and bought the Pennsylvania Gazette.

Soon after this he entered upon a career of public service, first as clerk to the general assembly of Pennsylvania. In 1751 he was himself elected to that body and from 1753 to 1774 he was deputy Postmaster-General for the North American colonies.

On a number of occasions Franklin visited England to negotiate with the British Government on behalf of the colonists. It was in the course of his voyages to England that he carried out a series of experiments to discover the nature of course of the Gulf Stream. This is a warm ocean current which flows from the Gulf of Mexico along the East coast of North America and then turns eastwards across the Atlantic from a point off the coast of Newfoundland. In plotting this current Franklin made regular determinations of the temperature at various depths in the ocean.

The nature of thunder and lightning had interested scientists and philosophers for centuries, but it fell to Franklin to investigate the nature of lightning experimentally. He had prepared a child's kite with a wire spike attached to it. Near the other end of the string to which the kite was attached, he secured a key. He released the kite as a thundercloud passed overhead, and was soon able to draw a large electric spark from the key. This could have been very dangerous, had he not held the kite string with an insulator. As the rain soaked into the string, thus increasing its electrical conductivity, electricity flowed freely down the string and was found to have the same properties as the electricity produced by friction. The success of this experiment suggested the use of lightning conductors to protect tall buildings.

Another contribution which Franklin made to the study of electricity was to establish the existence of positive and negative charges.

Although it is not certain whether he invented them Benjamin Franklin was certainly the first person to describe bifocal spectacles. Previously, if anyone required lenses of different powers for reading and for seeing distant objects, two separate pairs of spectacles were required. However, this was avoided by having two half lenses cemented together. The lower half-lens gave suitable magnification for reading, while the upper half was less powerful and was used for focusing on objects further away.

Franklin was too much concerned in politics to devote much time in his later life to science. He helped draw up the Declaration of Independence and shortly before his death in 1790, he was campaigning for the abolition of black slavery.