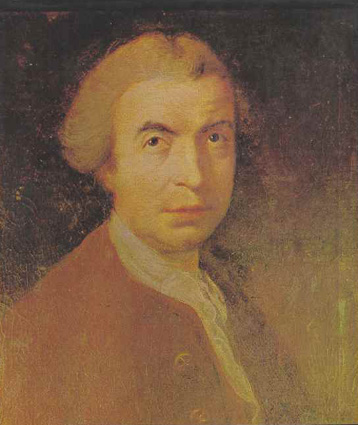 Roger Boscovich was a Croatian-born Jesuit scientist, philosopher, and poet who, for much of his life, taught at the Collegium Romanum and the University of Padua. The work for which he is best known today is a theory, inspired by the earlier work of Isaac Newton, describing the ultimate structure of matter. Indeed he can be regarded as one of the fathers of modern atomism.


The first theory of quarks?

Boscovich explained all the forms of matter in terms of a single kind of elementary particle, which he supposed to be impenetrable, point-sized, and floating in a vacuum. The varied forms of matter resulted from the relative positions and velocities of these fundamental particles.

Boscovich's theory predicts a number of phenomena he could not have anticipated. For example, his particles can never be absolutely motionless, a constraint that applies to real atoms obeying the rules of quantum mechanics. Because the force between particles alternates between attraction and repulsion there are several points of stable equilibrium favoring the creation of bound systems in which the particles can have certain discrete separations. The equilibrium points could be regarded as a crude approximation of the quantized orbitals or energy levels, of electrons in an atom.

Phillip M. Rinard of Emporia Kansas State College, writing in American Journal of Physics in 1976, pointed out that Boscovich's force law might also describe some of the apparent interactions of quarks. Like the electrons in atoms, quarks bind together in stable, quantized orbitals, which could be interpreted in terms of the equilibrium points intrinsic to Boscovich's theory. Furthermore, beyond each equilibrium point is a region characterized by an attractive force so that quarks pulled apart would tend to return to their equilibrium configuration. If the attractive potential were large enough (Boscovich did not specify its magnitude), the quarks might be permanently confined.


Champion of many worlds

In his De lunae atmospheraera (1753), Boscovich presented evidence that the Moon has, at best, only a thin atmosphere. Yet, for the most part, he was a strong supporter of pluralism – the notion that there are many inhabited worlds like the Earth. In his Philosophiae naturalis theoria (1758), he speculated without restraint on the possibility of other universes that may occupy different orders of space and time from our own. His position in the pluralist debate contrasts sharply with that of a contemporary theologian in Italy, Giovanni Cadonici.