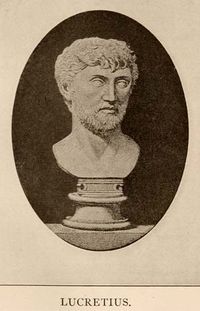 Lucretius (Titus Lucretius Carus) was a Roman poet who, in his De Rerum Natura ('On the Nature of Things')1 combined elegant Latin verse with the philosophy of Epicurus and that of the early atomists, Leucippus and Democritus, to explain his ideas, including the probability that other worlds and other life-forms exist. On this subject, he wrote:

Granted, then, that empty space extends without limit in every direction and that seeds innumerable are rushing on countless courses through an unfathomable universe ..., it is in the highest degree unlikely that this earth and sky is the only one to have been created ... So we must realize that there are other worlds in other parts of the universe, with races of different men and different animals.

Furthermore, he asserted that "when abundant matter is ready, when space is to hand, and no thing and no cause hinders, things must assuredly be done and completed." The latter is an early expression of what Lovejoy has termed the "principle of plenitude". The publication in the West of De Rerum Natura, following its rediscovery in 1473, forced the Church to confront a powerful philosophy that seemed hard to reconcile with orthodox Christianity.

1. Lucretius. The Nature of the Universe, trans. by Ronald Latham. Baltimore: Penguin Books (1951).