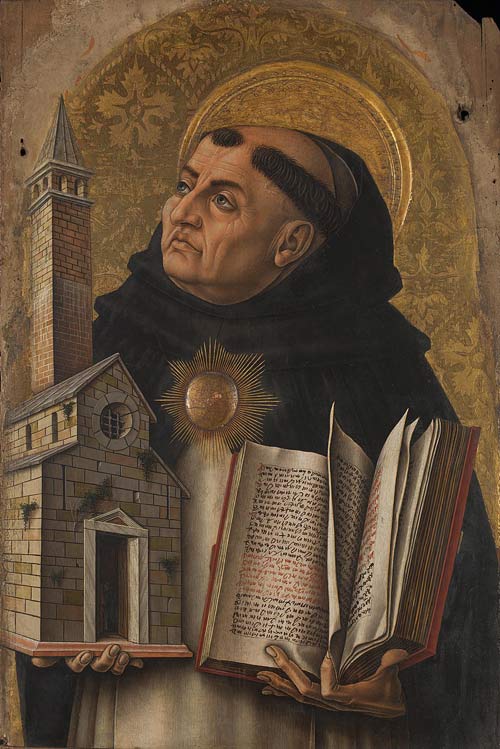 Thomas Aquinas was a leading Italian scholastic theologian who defended the teachings of Aristotle. He was perhaps the most well-known and highly regarded theologian and philosopher of the Catholic Church,

Aquinas was born the youngest son to a Sicilian noble family in 1225. Although he was intended from a young age to become an abbot, Italian political and papal infighting redirected him to a university in Naples, where his studies, including his earliest encounters with Aristotle, were directed by members of the newly founded Dominican Order, an order of which Aquinas eventually became a member despite prolonged, powerful objections from his family.

Traveling to France in 1245, Aquinas continued his studies under the renowned Aristotelian commentator and fellow Dominican, Albert Magnus, before joining the University of Paris' faculty as regent master in theology, during which time he began work on his Summa contra Gentiles. Upon completion of his regency in Paris, Aquinas returned to Italy in 1259, where he was eventually called to Rome, in 1265, by Pope Clement IV to serve as a papal theologian. While in Rome, Aquinas continued to teach, now at a newly established Dominican school at Santa Sabina, and began to write his most famous work, the Summa Theologiae, sometimes called the Summa Theologica.

In 1268, Aquinas was called once again to serve as regent master in Paris, where "Averroism", or heterodox Aristotelianism, had risen to prominence within the university. Upon the completion of his second regency in Paris, Aquinas returned to Naples, where he founded a new Dominican university and once again assumed the position of regent master and continued work on his Summa Theologiae. In 1274, Pope Gregory X called the Second Council of Lyons in an attempt to repair the great schism that had taken place within the Church in 1054. Summoned to the council, Aquinas suffered an accident while traveling, fell ill, and died several days later on March 7, 1274.

Aquinas argued against pluralism. He reasoned that if there were many inhabited worlds they would either have to be different, in which case they could not all be perfect (thus casting doubt on God's own perfection), or identical, which (considered from God's point of view) would be pointless.

European learning in the 13th century