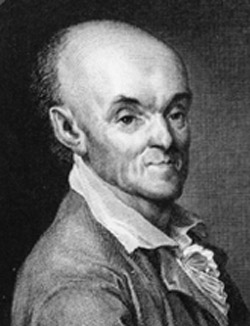 Joseph Lalande was a Jesuit-trained French astronomer whose Histoire céleste française (1801) contained a catalogue of over 47,000 stars (one of which, Lalande 21185, was for a while suspected of having exoplanets), though the observations were reputedly made by his nephew Michel Lalande (1766–1839). His written works include the widely read Traité d'astronomie (1764) and Bibliographie astronomique (1802). In 1760 Lalande became professor of astronomy in the Collège de France, holding the post for 46 years, and in 1768 was appointed director of the Paris Observatory. In the latter capacity he often engaged women astronomers for particular projects, among them the prediction of the exact date of the next return of Halley's Comet. To this end, he asked a well known amateur astronomer, Nicole-Reine Lepaute, to work with noted astronomer Alexis Clairaut on the problem. The sheer volume of computational work required that Lepaute work day and night. She and her collaborator released their findings in September 1757, in the nick of time, since by Christmas of that year the first sightings of the comet began. Their work was published in a paper by Clairaut, who, initially, gave full credit to Mme Lepaute's efforts. Later, sadly, Clairaut retracted his statements and took full credit for himself. Lepaute's efforts, however, were recognized by Lalande who included her in many other projects. Nor was she his only female collaborator. One of the first large-scale studies of lunar astronomy was undertaken at the Paris Observatory, and the chief investigator was an amateur, Mme. du Piery. Lalande's niece by marriage, Marie-Jeanne de Lalande, lectured on astronomy and worked with Lalande in collaboration with her husband. Women soon became well known as 'computers,' and were eventually employed at observatories around the world, including Harvard College Observatory.

Lalande's Traite d'astronomie (published in three volumes under the title Astronomie in 1792) includes passages that argue in favor of intelligent life throughout the universe. He reconciles his support for pluralism with Christian doctrine by arguing that the glory of God is magnified by the presence of life on other worlds:

If the extent of his works announces his power, can one supply any idea more magnificent and more sublime? We see with the naked eye many thousands of stars; an ordinary telescope reveals many more in every region of the sky... [I]magination pierces beyond the telescope; it sees a new multitude of worlds infinitely larger.

Later, however, although continuing to support pluralism, he declared himself an atheist: "I have searched through the heavens, and nowhere have I found a trace of God."