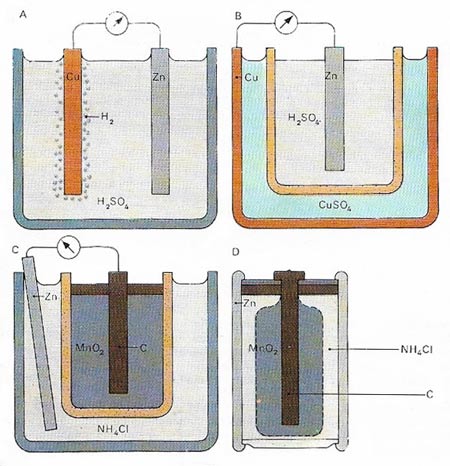 The voltaic cell (A) consists of a jar containing sulfuric acid (H2SO4) in which are suspended a copper (Cu) anode and a zinc (Zn) cathode. When the circuit is closed a current flows, zinc ions pass into the acid from the cathode and hydrogen (H2) is deposited on the anode. Hydrogen eventually obstructs the reaction, but not so in the Daniell cell (B), in which the zinc cathode and sulfuric acid are encased in a porous pot surrounded by a solution of copper sulphate (CuSO4). The copper case acts as the anode. The Leclanche (C) and dry cells (D) have carbon (C) anodes enclosed in manganese dioxide (MnO2) in ammonium chloride (NH4Cl); both types have zinc cathodes. 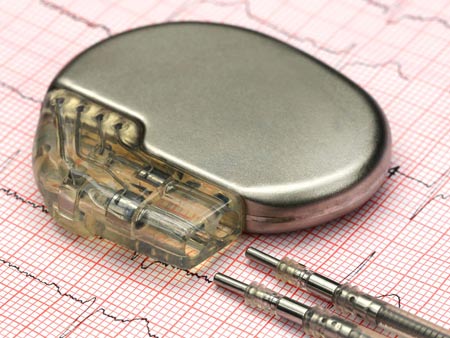 Heart pacemakers like the one shown here and miniature hearing aids, can be powered by batteries. These are examples of primary cells. Secondary cells or storage batteries can be recharged. Early batteries all had metallic plates separated by solutions of salt-like chemicals. The dry, or Leclanche, cell replaced the liquid with a paste. Such batteries, which use zinc and carbon (with a manganese dioxide depolarizer) as electrodes, are the type used in transistor radios, torches, and many other everyday appliances. In recent years, battery technology had led to the production of very small but highly reliable batteries which also use zinc and a metal oxide, in this case mercury. 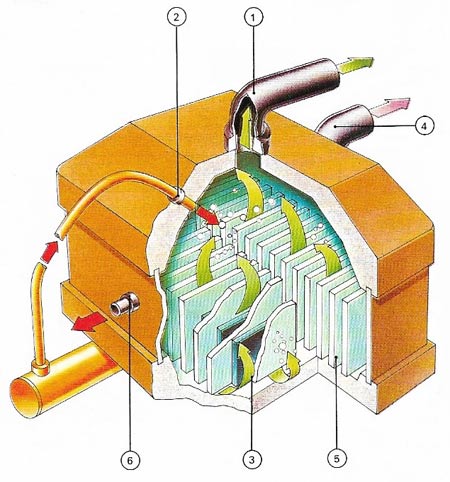 Elements which gain or lose electrons easily are often prepared from ionic compounds by electrolysis. Chlorine (1), For example can be produced by electrolysis of a sodium chloride solution (2) at graphite anodes (3). Hydrogen (4) from the electrolysis of water is released at the cathodes (5). Left behind in solution are sodium and hydroxyl ions, giving a solution of sodium hydroxide (6). In the practical cell a partition keeps the products &hydrogen and chlorine) apart to prevent them from reacting together to produce hydrogen chloride. Similarly a diaphragm keeps the hydroxyl ions from reacting to form sodium hypochlorite. 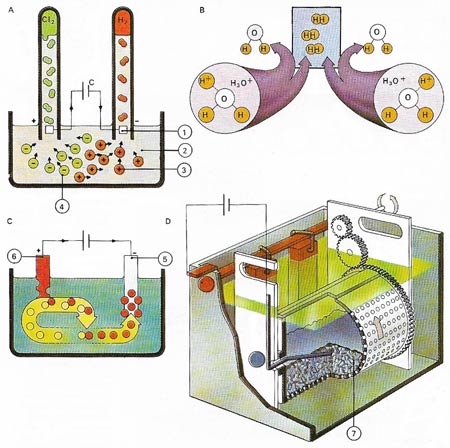 Electrolysis can easily be shown. A current is passed (A) between platinum electrodes (1) through a dilute hydrochloric acid electrolyte (2). Positively charged cations (3) move towards the negative electrode (cathode) and anions (4) move to the positive electrode (anode). The hydrogen ions combine with water to form hydronium ions H2O+; when two hydronium ions (B) reach the cathode, they each receive an electron, thus forming atoms of hydrogen which combine to form a molecule of gas. In copper sulfate electrolyte is deposited onto the object to be plated (5), while copper from the anode (6) is drawn into solution. A modern barrel electroplating machine (D) can plate many small objects (7) simultaneously. 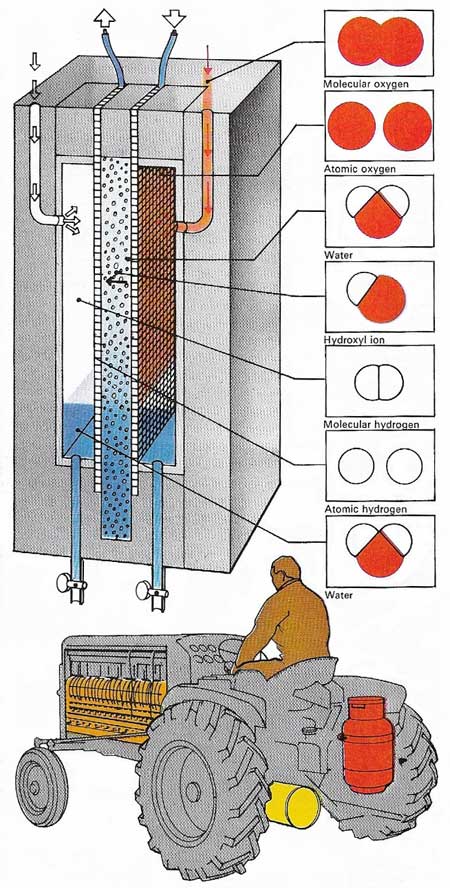 The fuel cell, like a battery, uses the energy generated during a chemical reaction to produce electrical power. One simple cell uses oxygen and hydrogen as fuels to produce electricity, the water being formed being a by-product. The electrolyte in this case is located in a very thin, water-saturated membrane. This allows ions to pass through it, but does not allow the passages of atoms or molecules. The electrodes are of wire mesh, coated with platinum. Molecular hydrogen and oxygen are fed to them from gas chambers. The cathodic platinum converts oxygen to hydroxyl ions, which move across the membrane and react with hydrogen at the anode to form water. Electrons released by the hydrogen traverse the external circuit – as in electric current – to help form hydroxyl at the anode. A battery of such cells can power a tractor, with fuel tanks holding liquid oxygen and hydrogen either as a liquid or as a solid hydride.

Electrochemistry is a branch of physical chemistry dealing with the interconversion of electrical and chemical energy. Many chemical species are electrically-charged ions, and a large class of reactions – oxidation and reduction – consist of electron-transfer reactions between ions and other species. If the two half-reactions (oxidation, reduction) are made to occur at different electrodes, the electron transfer occurs by the passing of a current through an external circuit between them . The electromotive force driving the current is the sum of the half-reactions, which represent the free energy produced by them. Conversely if an emf is applied across the electrodes of a cell, it causes a chemical reaction if it is greater than the sum of the potentials of the half-reaction. Such potentials depend both on the nature of the reaction and on the concentrations of the reactants. Cells arising through concentration differences are one cause of corrosion.

Studies of electricity and chemistry went hand in hand long before anyone knew of the existence of electrons. During the eighteenth century, there was much interest in static electricity, leading to other development of the Leyden jar (for storing "electric fluid" generated by friction) and the lightning conductor. However, it was not until the Italian physiologist Luigi Galvani (1737–1798) found, towards the end of that century, that frogs' legs would contract if different metals were applied to nerve and muscle that current electricity was discovered. In 1795, another Italian, the physicist Alessandro Volta (1745–1827), showed that his "animal electricity" could be produced without living tissue. He separated tow pieces of metal by a cloth moistened with salt solution and thus made the first electrical battery. Within five years, it was discovered in England that current from such a battery could decompose water into hydrogen and oxygen gases. Thus, the foundations of electrochemistry were laid. By a chemical reaction involving two metals, a flow of electrons can be produced; such flow can bring about other reactions.

Batteries soon became important equipment in every laboratory and led to many new discoveries, such as the isolation of the elements sodium and potassium in the first decade of the nineteenth century by Humphry Davy (1778–1829).

When a metal such as zinc forms compounds, it does so in many instances by losing two electrons to form a doubly positive zinc ion (Zn2+). Metals differ in the ease with which they lose electrons, so that if a piece of zinc metal is placed in a solution of copper sulphate (which contains Cu2+ ions), the zinc gives up electrons to the copper. The net result is that zinc is converted to zinc sulfate, which contains Zn2+ ions, and copper ions become metallic copper.

When an element gains electrons to form a negatively charged ion, it is said to be reduced; if it loses electrons to form a positively charged ion, it is said to be oxidized. A reaction where reduction and oxidation cancel each other out, as in the zinc/copper sulfate case, is called a redox reaction. Redox reactions can be tapped to supply electric currents by preventing the reduction and oxidation from occurring at the same place. A battery can be made by suspending zinc in zinc sulfate and copper in copper sulfate and linking the two solutions by a porous partition and the metals with wire. Each of the reactions in such an arrangement is called a half-cell. When two half-cells are added together, a cell is completed and the voltage is produces depends on the particular half cells that make it up.

That different batteries produce different, but specific, voltages depending on their chemical composition is not surprising, in view of the differences in reactivity between different elements. The reverse also seems logical: that a particular quantity of electrons should produce a particular amount of change in a substance. The quantitative relationships between electricity and chemical reactions were stated during the 19th century by Michael Faraday. The extraction and electroplating of metals, and the production of reactive electronegative elements such as chlorine and fluorine, are often done electrolytically.

The products from electrolysis reactions sometimes depend on the conditions used, as well as the amount of electricity. If fused (molten) sodium chloride is electrolyzed, sodium metal forms at one electrode and chlorine gas at the other. However, when a solution of sodium chloride is electrolyzed, using a graphite anode (positive electrode) and an iron cathode (negative electrode), chlorine and hydrogen gases are produced, leaving behind sodium hydroxide solution.

The ions of different elements may be positive (cations) or negative (anions). In a solution that is being electrolyzed, cations are attracted to the cathode and anions to the anode. If aluminium is made into an anode in an acid solution, a very thin layer of aluminium oxide forms on it. This anodization protects the aluminium from corrosion and is used on a wide range of articles.

Many oxidation reactions are used in everyday life: for example, the burning of gasoline in a car is such a reaction. Instead of releasing the energy from such a reaction as heat, it can be converted into a flow of electrons in a fuel cell. These cells are theoretically much more efficient energy converters than heat engines. However, difficulties in designing suitable fuel cells for everyday purposes have meant that their use has been limited largely to applications where cost is not an important factor.

The electrochemical series, also called the electromotive series, is a sequence of elements (chiefly metals) listed in order of their standard redox potentials – i.e., the potential developed by an electrode of the element immersed in a molar solution (see mole) of one of its salts. The series starts with the metal that tends to lose the most electrons in reactions. A standard hydrogen electrode is arbitrarily assigned an oxidation potential of zero, so that the metals can be compared. Those that lose electrons more readily than hydrogen are termed electropositive; those that lose electrons less readily are called electronegative (see electronegativity). Metals high in the series are generally more reactive than those lower down, and displace them from aqueous solutions of their salts. The order of some common metals in the electromotive series is: lithium, potassium, calcium, sodium, magnesium, aluminum, zinc, chromium, iron, cobalt, nickel, tin, lead, hydrogen, copper, mercury, silver, platinum, and gold. See also ionization potential.