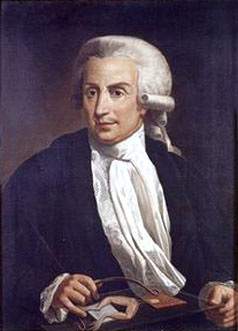 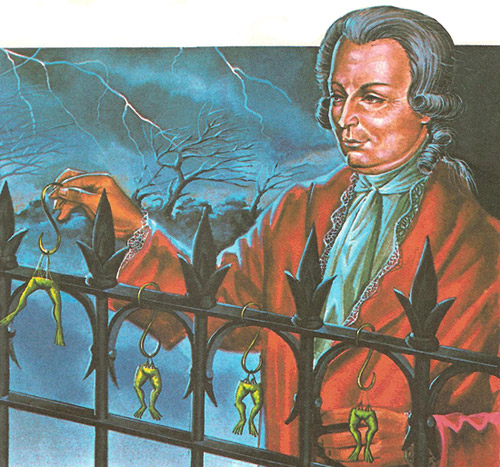 Galvani was a devoted experimenter and even used the discharges between thunder-clouds as one of his supplies of electricity. It was while working in the open air with frogs' legs that he found a new source of electric current. He died without realizing the true meaning of his discovery.

Luigi Galvani was an Italian physician and physicist who did pioneer studies in electrophysiology, or "animal electricity". Galvani spent his life experimenting and was a very skilful worker and accurate recorder. It is probable, however, that he would have remained unknown except for a single observation he made during the course of his investigations.

Galvani was born in Bologna in northern Italy. Theology was his first study but he gave this up in favor of a medical career. He lived in Bologna all of his life, first practicing as a physician and then lecturing in medicine at the University. In 1775 he was made professor of anatomy there.

Galvani's early investigations were concerned with structural differences in various kinds of animal. In 1780, when he was 43, he started a series of experiments to show the effect of electricity on the action of the muscles. The work took eleven years to complete, and involved hundreds of experiments with animal preparations – usually frogs' legs. In the course of these detailed studies he unknowingly stumbled across many electrical phenomena – electric waves, electromagnetic induction, and electric oscillations. He never followed up this work however, and understanding and explanations of these phenomena came much later.


A new source of electricity

For his chief supply of electric current, Galvani used the simple electrostatic machines of the day. They were primitive devices that had to be charged by friction. For his other supply he used electrical disturbances in thunderstorms – which meant carrying out his experiments in the open during violet weather. At every lightning flash, the leg muscles of the frog would contract. To conduct the atmospheric electricity to the leg Galvani used large metal objects. For instance he would place the leg muscle in contact with an iron fence while the nerve was attached to a brass hook. In 1786 he made the observation which brought about his fame. He noticed that if the two metals he used for conduction were in contact, the muscle would still contract even when the skies were clear. He carried out similar experiments inside with the same result. He also found that the strength of the contraction depended upon the metals he used.

Here was a new source of electricity independent of friction machines or lightning. Unfortunately Galvani never realized the importance of his discovery. He himself thought the electricity came from the animal. It was left to a fellow Italian, Alessandro Volta, to show that the electric current was in fact produced by the two metal surfaces making contact.

Galvani's name was given to the galvanometer and to several processes involving electricity.