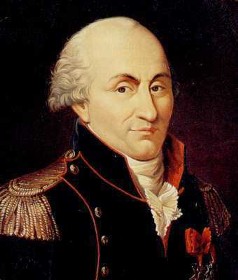 Charles Coulomb was a French physicist, born at Angoulême, famous for his experiments on friction and the invention of the torsion balance (see torsion) for measuring the force of magnetic and electrical attraction. His experiments in electrostatics using the torsion balance led to the discovery of the inverse square law that bears his name (see below). He also showed that the charge on a charged conductor lies solely on its surface.

In early life Coulomb entered the engineers, and served some time at Martinique. In 1777 he won an Academy prize because of a work on magnetic needles, and again two years later through his Théorie des Machines simples. For speaking the truth about a projected canal in Brittany, he was imprisoned for a while. He lived in retirement during the Revolution and became a member of the Institute in 1804.

The SI unit of charge, the coulomb, is named after him.

Coulomb's law states that the force between two charged objects, regarded as point charges q1 and q2, is directly proportional to the product of the quantity of charge on the objects and inversely proportional to the square of the separation distance r between the two objects. It is now usually stated in the form:

where ε is the absolute permittivity of the intervening medium.