Torsional rigidity is defined to be the twist necessary to turn a known length of rod through a unit angle. Since the calculation of torional rigidity is complicated, it is usually found experimentally with the torsional balance or the torsion pendulum. 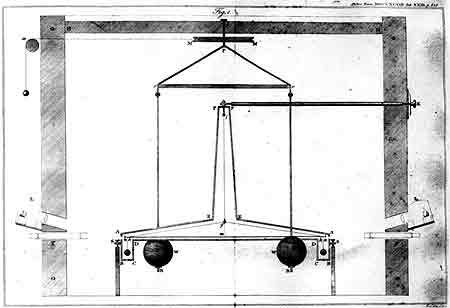 The torsion balance experiment of Henry Cavendish who in 1797 was the first to experimentally measure the gravitational constant G. Courtesy of the Journal of Measurement and Technology.

Torsion is a twisting deformation produced by a torque or couple. A good example of torsion in a practical situation is that experienced by the long shaft that connects a drill head to the machinery on the surface that turns the shaft. The whole length of shaft is turned from the surface by a torsional or twisting force. The resistance as the drill head bites into the rock coupled with the turning force at the top causes a powerful twisting of the material of the shaft. The steel in the shaft resists this twisting by means of its torsional rigidity.

Some earlier motor vehicles used a torsion bar suspension for springing. One end of a bar was fixed and the other end was twisted by the uneven jolting of the vehicle. The twisted bar using its torsional rigidity acted as a spring.


Use of torsion in scientific instruments

The principles of torsion are used in many scientific instruments as a means of measuring small forces. In the moving-coil galvanometer, which measures electric current, a coil hung by a fine fiber in a magnetic field is deflected until it is arrested by the torsional rigidity of the suspension ribbon. The torsion balance is another instrument that measures very tiny forces, such as those due to gravitation, magnetism, and electricity.

Steel has a high resistance to torsion whereas string or thread has virtually none. When a body hung by a length of steel wire is twisted to one side and then let go, it spins backwards and forwards. If the period (i.e., the time taken for a complete swing) is measured for different sizes of swing, it is found, as in the ordinary pendulum, to be independent of the size of swing. This means that even though the swings gradually die down due to air resistance and so on, the period remains the same. Such a device can therefore act as a timekeeper, and it is called a torsional pendulum. This type of pendulum is found in some clocks. The torsional rigidity of any specimen can be measured with the torsional pendulum as the period of the swing depends only on the torsional rigidity and the moment of inertia of the swing body about the suspension. The period is independent of gravity.

In the torsion balance, a light bar is hung at its middle from a fixed point by a fine wire or ribbon. Bodies whose gravitational or electrical attraction are to be measured are attached to each end of the bar. When other large attracting masses or charged bodies are brought up close, the attraction between the small and large bodies pulls the bar around. It comes to rest with the suspension wire twisted. By reflecting a beam of light off a mirror attached to the wire the amount of twist is measured. The torsional rigidity of the suspension wire has previously been measured so that the attracting force is known. This instrument was used to measure the gravitational constant and to verify the inverse square law of electric charge.