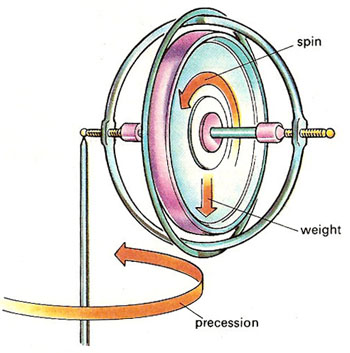 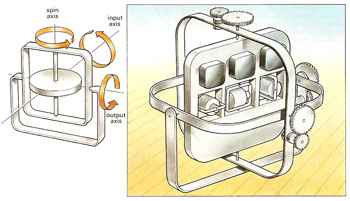 A gyroscope mounted in double gimbals (left) demonstrates the phenomenon of gyroscopic inertia. If the gyroscope is spinning in the sense indicated and the indicated torque is applied to the input axis, the gyroscope and the inner gimbal will tend to rotate, also in the sense indicated, about the output axis. This phenomenon is utilized in the gyro-stabilized platform (right) where three gyroscopes are kept spinning about mutually perpendicular axes. Any torque tending to alter the orientation of the platform relative to its original orientation is "sensed" by at least one of the gyroscopes and a servomechanism system comes into operation restoring the platform to its original orientation whatever the new orientation of the mounting. Instrument packages attached to the platform are thus kept in a constant orientation.

A gyroscope is a device that utilizes the angular momentum of a heavy spinning disk, called a rotor, to sense angular motion of its base about one or two axes at right angles to the spin axis. The rotor is mounted and moves within gimbals within a frame and maintains its orientation regardless of any movement of the base.

Although the scientific gyroscope was only devised by Jean Foucault in the mid-nineteenthth century, the child's traditional spinning top demonstrates the gyroscopic principle. The fact that it will stay upright as long as it is spinning fast enough demonstrates the property of gyroscopic inertia: the direction axis resists change. This means that a gyroscope mounted universally, in double gimbals, will maintain the same orientation in space however its support is turned, a property applied in many navigational devices.

Instrument gyroscopes usually consist of a wheel having most of its mass concentrated at its rim to ensure a large moment of inertia and which is kept spinning in frictionless bearings by an electric motor. Once the wheel is set spinning its response to applied torques can be monitored or used in control servomechanisms.