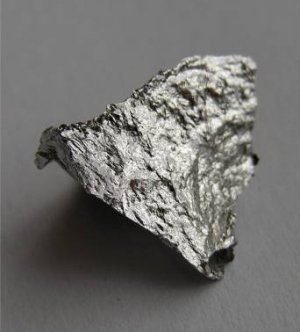 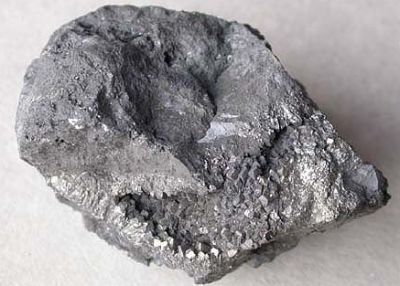 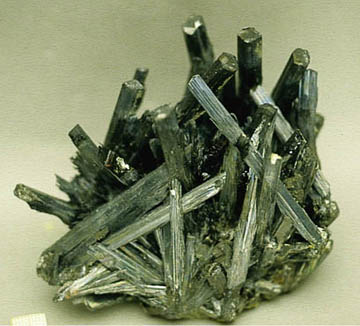 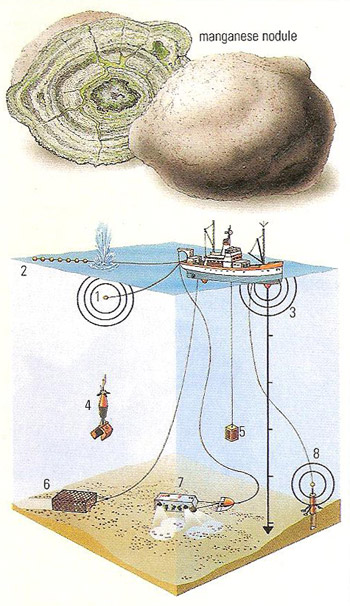 Fig 4. Various ways of exploring for abyssal ore nodules: seismic surveying with an airgun (1) and a string of hydrophones (2), echosounders (3), grab samplers with cameras attached to them (4), oceanographic probes like the bathysonde (5), dredges (6), deep-sea cameras (7), and wire-bound samplers, such as the box corer (8).

Manganese (Mn) is a gray-white or silvery, brittle metallic element in group VIIB of the periodic table; a transition element. It was first isolated in 1774.

Manganese is found naturally in the ores pyrolusite, manganite, and hausmannite, and as manganese nodules. It occurs in several allotropic forms.

Pyrolusite is a soft, gray-black oxide mineral composed of manganese (IV) oxide (MnO2). Of widespread occurrence, pyrolusite (pyrolucite) is the chief ore of manganese. It is a secondary mineral formed as a precipitate in lakes and bogs at low temperatures, often in veins of quartz, but also occurs as manganese nodules on the floor of the Pacific Ocean. It usually occurs in masses that have an earthy luster, although it may form prismatic crystals (in the tetragonal system) and fern-like aggregates in the joints of sedimentary rocks. Hardness: massive form 2–6, crystals 6–7; relative density 4.5–5. See also manganite.

Manganite is a black mineral consisting of hydrated manganese (III) oxide (MnO[OH]); an ore of manganese. It forms as low-temperature veins and secondary deposits, and occurs as bundles of monoclinic system striated prisms, which are often crusts of small crystals. It is black or gray in color and has a metallic luster. It alters to pyrolusite. Manganite is found in western Europe, Michigan and California. Hardness 4, relative density 4.3.

Manganese nodules are concretions with diameters averaging 4 cm (2 in) that occur in red clay and ooze on the floor of the Pacific Ocean, with the major concentrations around the Samoan Islands (Fig 2). They contain high concentrations of manganese. They are thought to have formed as agglomerates from colloidal solution (colloid) in the ocean's waters. The commercial mining of the nodules is being delayed by legal controversy over international rights to this valuable mineral resource. Although commercial lies in the future, but work is centered on two systems – hydraulic suction dredges and mechanical dredges.

Elementary manganese is obtained by the reduction of manganese (IV) oxide with aluminum in a furnace, or by electrolysis. When smelted with iron ore, manganese ore gives the alloys spiegeleisen and ferromanganese, widely used in steel production to increase hardness, resistance, and other properties. Manganese also forms useful alloys with some nonferrous metals.

Manganese (IV) oxide (MnO2), a black crystalline solid, is widely used as an oxidizing agent and as a depolarizer in electric dry cells. Permanganate (MnO4-) is used in nickel refining and tanning, and as a bleach, disinfectant, and powerful oxidizing agent. Manganese (II) sulfate (MnSO4) is a component of some fertilizers.

Inhaled my miners in underventilated mines, manganese oxide causes brain damage and symptoms very similar to those of parkinsonism. Minute quantities of manganese are needed by the body. See trace element.

A manganese star is a B star, with a surface temperature of 10,000 to 15,000 K, whose spectrum shows an unusually high ratio of manganese to iron. This and other chemical anomalies are due to the physical separation of different kinds of ions in the stellar atmosphere. Manganese stars rotate slowly, as Ap stars do, but lack their strong magnetic fields. In their spectra, temperature, and other properties, they are intermediate between Ap stars and Am stars.

A mercury-manganese star is a type of manganese star the spectrum of which has a prominent line at 3984 Å due absorption by ionized mercury. A bright example is Alpheratz (Alpha Andromedae).