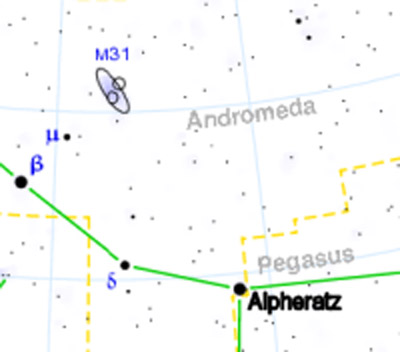 Darker regions show greater concentrations of mercury on the surface of Alpheratz. The mercury clouds tend to concentrate along the equator, probably due to the star's rotation. Credit: Kochukhov et al./Nature).

Alpheratz (Alpha Andromedae) is the brightest star in the constellation Andromeda and the northeastern star of the Square of Pegasus. Its proper name is generally taken to mean "the horse's shoulder" or "navel," indicating that the star originally belonged more to Pegasus (in which it served as Delta Peg), though now it is formally within the boundaries of Andromeda and marks the head of the royal daughter. Its alternative proper name is Sirrah.

Alpheratz is the brightest mercury-manganese star (see manganese star) but, unusually for stars in this category, lacks a detectable magnetic field. It is also a spectroscopic binary with a period of 96.7 days. The dimmer companion seems to be about one tenth as bright as the primary.

In 2007, researchers led by Oleg Kochukhov of Uppsala University in Sweden announced that Alpheratz was the first star observed to have weather. This took the form of shifting clouds of mercury. All previously known structures on stars, such as sunspots, are due to magnetic fields but the absence of such a field on Alpheratz means that some other mechanism must be at work. Kochukhov and his colleagues found that the mercury concentration varies across the surface of Alpheratz by up to a factor of 10,000, and the pattern of clouds changes over time. Kochukhov believes these changes in the mercury cloud cover may be caused by tides raised on Alpheratz by its close companion.