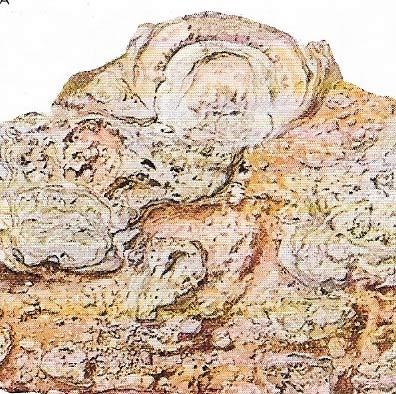 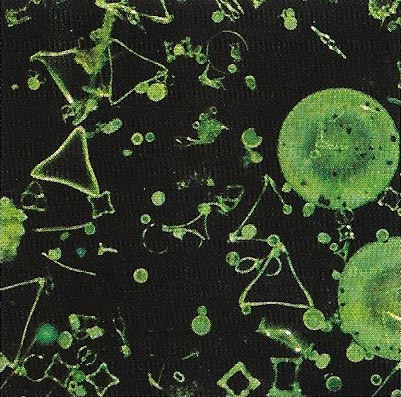 Fig 1. The earliest known plants, the primitive algae, are known from the rock structures (stromatolites) they produced (top). These were created by the fossilization of concentric layers of mud and algae. Other fossil algal remains commonly found are the "shells" of diatoms (bottom). These small, brown algae have been abundant since the Cretaceous period, in all aquatic habitats. The diatomaceous earths are composed entirely of their shells. 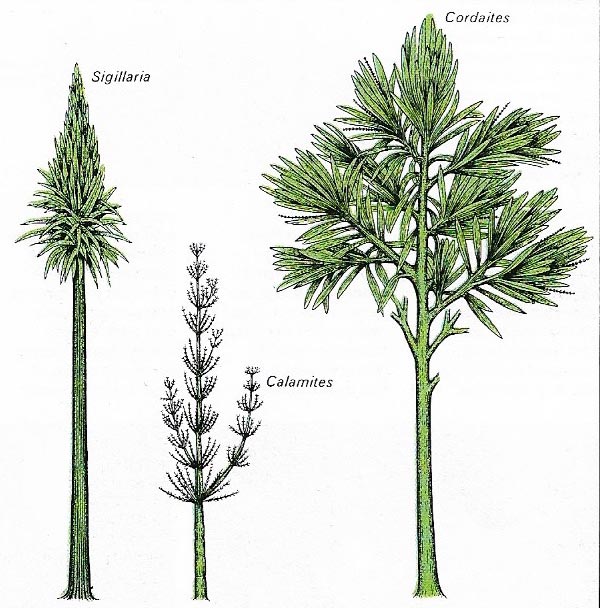 Fig 2. The vegetation of the great coal forests consisted of lycopods (club-moss relatives), horsetails, and primitive gymnosperms, Sigillaria was typical of the lycopods, growing to a height of 30 m (100 ft) in very marshy ground. Calamites was a 9 m (30 ft) horsetail that grew as reed beds in the waters of the swamps. Drier areas supported gymnosperms such as Coraites, a primitive relative of the conifers. The undergrowth of these forests consisted mainly of ferns. 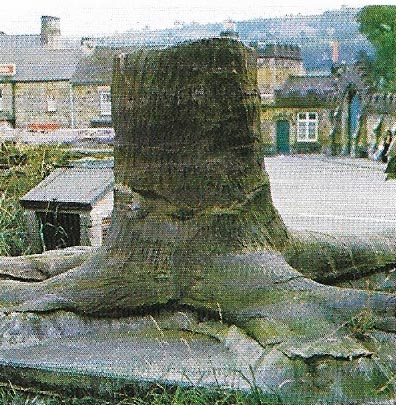 Fig 3. The great size of the coal forest trees is evident in this picture of a fossil Sigillaria stump. Although most trees of the Carboniferous forests lost all their recognizable structures on being decomposed and compressed into coal, sometimes the shapes of roots (stigmaria) and fallen trunks are preserved in the sands and muds on which they grew when the ground was clear of other plant remains. These remains are most often found in "seat earths" underneath coal seams. 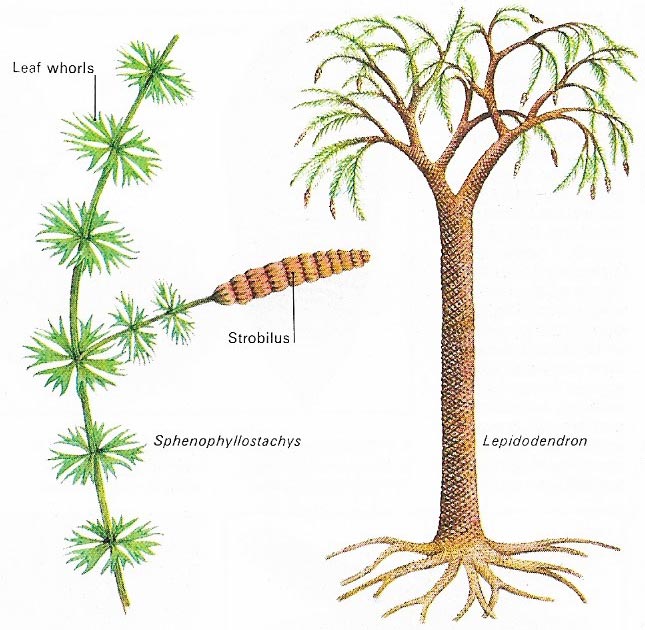 Fig 4. A creeping form that made up part of the undergrowth of the coal forest was the horsetail Sphenophyllostachys. Whorls of six leaves 2 cm (0.75 in) long sprouted at intervals from the stem and spores were formed in a strobilus or cone on a side branch. Lepidodendron was of the Carboniferous lycopods, growing to a height of 30 m (100 ft). The trunk had a characteristic diagonal pattern of leaf scars and branched dichotomously (repeatedly into two equal parts) to give a crown of branches with strap-shaped leaves. Under the ground the stem branched dichotomously to produce a woody root stock. 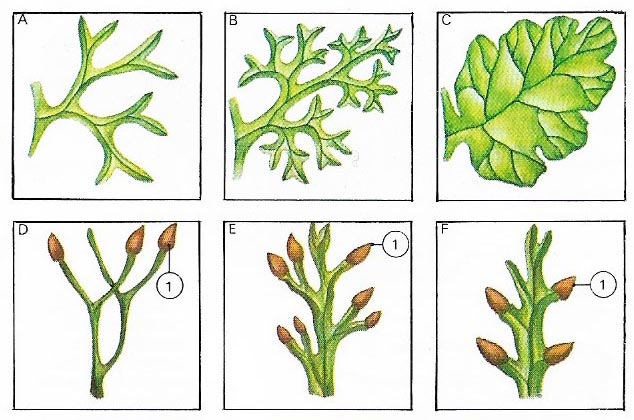 Fig 5.For a leaf to be an efficient organ for trapping light with which to produce food and energy, it must present as great an area as possible to the Sun. In primitive plants this was achieved by a larger number of branches. It is thought that outgrowths of these branches coalesced, forming single plates of a large area, so that the leaf was evolved (A, B, C). The primitive position (D) of reproductive bodies (1) is at the ends of dichotomously branched stalks. More advanced forms show a reduction in the branching (E) which is carried still further in some species of fossil fern (F). 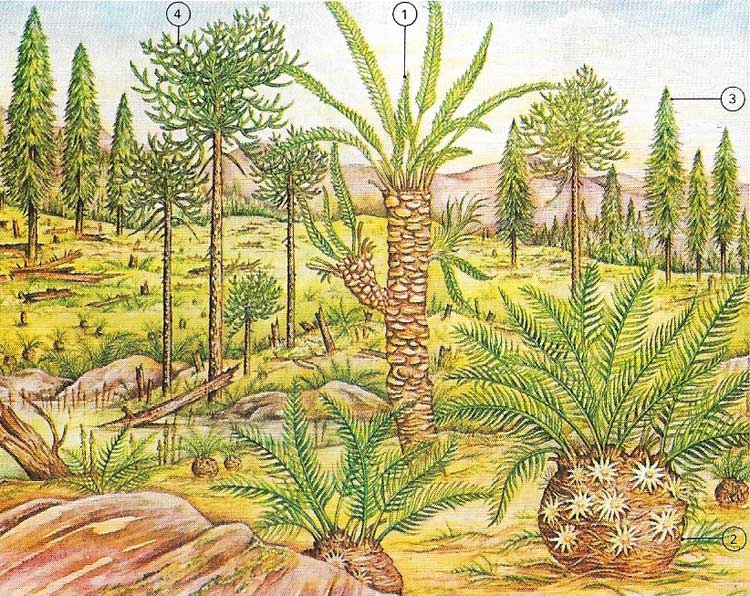 Fig 6. From the Triassic to the end of Jurassic, the gymnosperms were the dominant type of plant life. These resembled the gymnosperms found today – the conifers and the cycads – and were characterized by their properly developed seeds. These seeds were open to the air rather than borne in enclosed fruits. The gymnosperms of the Mesozoic were mostly conifers and Bennettitales, the latter being related to the cycads and consisting of a bulbous trunk which may have carried flowers, surmounted by palm-like fronds. Examples include Williamsonia (1) and Bennettites (2). Contemporary conifers include Voltzia (3) and Araucarites (4). 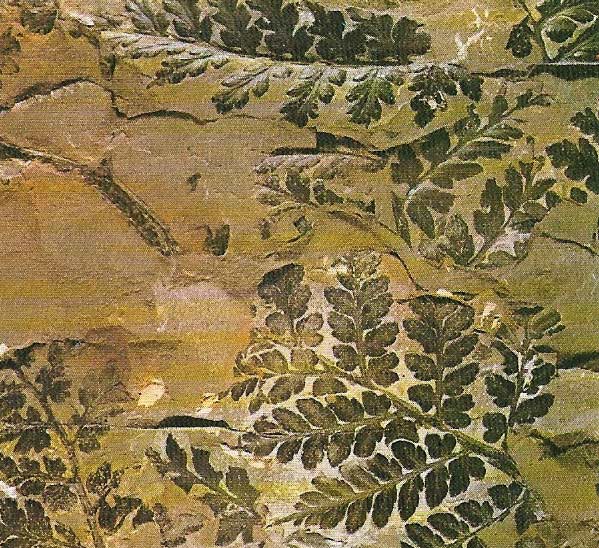 Fig 7. The fronds of this fossilized fern have been preserved as a thin film of residual carbon pressed between beds of Carboniferous shale, the most common method of plant fossilization.

Among the earliest traces of life on Earth are those of plants; strange, primitive growths spawned in the primeval ocean, the rich broth of materials absorbed from the Earth and atmosphere. These early traces – humped or branching masses of silica – occur in Precambrian, 2,000–3,000 million years old, in North America and South Africa.

Fossil evidence of plant life is hard to come by, for plants do not fossilize easily; they tend to lack durable hard parts, with the result that plant fragments are usually destroyed by weather or chemical processes before they have had time to be preserved in the rocks. Such plants that have become fossilized, however, are exhaustively studied by paleobotanists and from them much has been deduced about the history of plant life.

Of the two biological kingdoms, plants and animals, the plant kingdom is by far the most important and arose first – the earliest traces of animals do not appear until the early Cambrian, about 570 million years ago, in Australia. Plants take in energy directly from sunlight and use it to synthesize foodstuffs. Without these foodstuffs the food chains that involve the animal kingdom would have no starting-points: with no plants there would be nothing to feed the herbivores, with no herbivores, nothing to feed the carnivores, and so on. But at first the importance of plants was even greater. The early atmosphere of the Earth was probably so rich in carbon dioxide that no animal could have breathed it. Plants changed all that and made animal life possible, since the process of food production involves the removal of carbon dioxide from the atmosphere and the production of free oxygen. Thus once evolution began to transform primeval living protoplasm into different forms of life, the plants came first.


Life out of the water

All this early activity took place in the sea – the land and its atmosphere was too alien and hostile for much to happen there. Some algae became adapted to fresh water and it is from there that land plants are thought to have evolved. In time physiological changes came about in forms that enabled the plants to spend more and more time exposed to the atmosphere. The most important of these changes was the evolution of a vascular system – a form of plumbing that could carry water up from the base where it was available and synthesized foodstuffs down from above.

With the formation of light-trapping organs held toward the Sun (7) and a system of reproduction that would work in the air the true land plant had evolved. The atmosphere on land probably resembled that of today although it may have contained a higher proportion of carbon dioxide. With the proportion of carbon dioxide. With the emergence of terrestrial plant life there was food available for animals to follow them.

During the Devonian and Carboniferous, over 300 million years ago, plants had developed into a great variety of complex forms. These were still primitive by today's standards, being close relatives of the horsetails, club-mosses, and ferns (key), but nevertheless they formed vast forests (4, 5) and adopted all the growing habits of modern plants – trees, bushes, creepers, undergrowth, and the like. They grew in such numbers that the thick layers of their rotting remains became solidified into the present-day coal beds (6). One feature that characterized this flora was its lack of a self-contained reproductive body – the seed.


The evolution of the seed

The seed evolved during the Carboniferous (and certain ferns that bore a seed-like structure were common at this time) but the seed-bearing plants did not come into their own until the Permian and in the Triassic (225 million years ago) the dominant plants were gymnosperms (8) such as the conifers.

During the Cretaceous, which began about 135 million years ago, the angiosperms (9) or flowering plants came to the fore and a flora was established that was closely related to today's. For the past 130 million years no major plant group has arisen but there has been an enormous proliferation of grasses and herbs with a correlated influence on the animals associated with them.

Because the division of the geological column is based on the stages of evolution of animal life, the story of plant evolution does not fit easily into the time scale. In essence, the Earth's flora consisted entirely of algae up to Silurian times – half way through the Paleozoic era, the age of invertebrates. Then land plants – consisting of mosses and liverworts (bryophytes) and ferns, horsetails, and club-mosses (pteridophytes) – evolved and dominated the flora until the Permian, the end of the Paleozoic. Gymnosperms were the dominant plant forms from the Triassic until the beginning of the Cretaceous, half way through the Mesozoic, the age of reptiles. At this time the angiosperms developed and continued until the present.