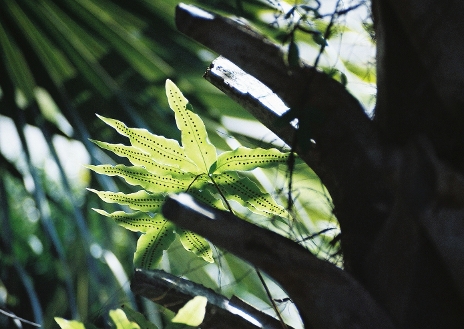 Fig 1. A fern growing on the trunk of a Sabal palm in Florida. Sunlight passing through the fern's frond highlight the many spore-containing sori. Source: NBII image gallery. 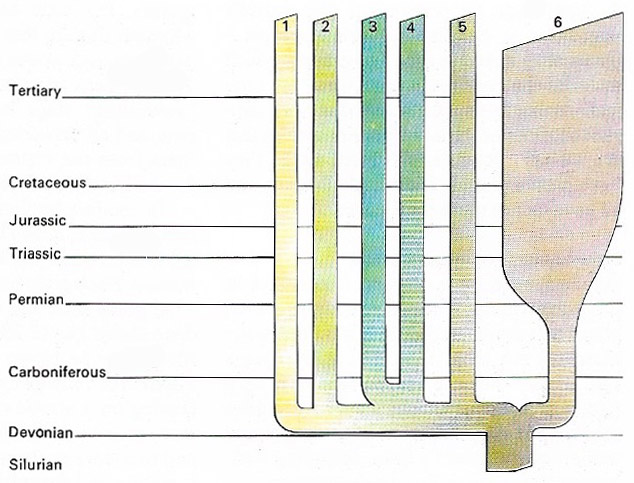 Fig 2. The number of living species of pteridophytes is small compared to the abundance of ferns in the Carboniferous period which was truly the age of ferns. It was in this period tat enormous beds of plants were fossilized to form coal seams. The modern groups that remain are the Psilotales (1), the clubmosses (2), the selaginellas (3), quillworts (4), the horsetails (5), and lastly the ferns (6). 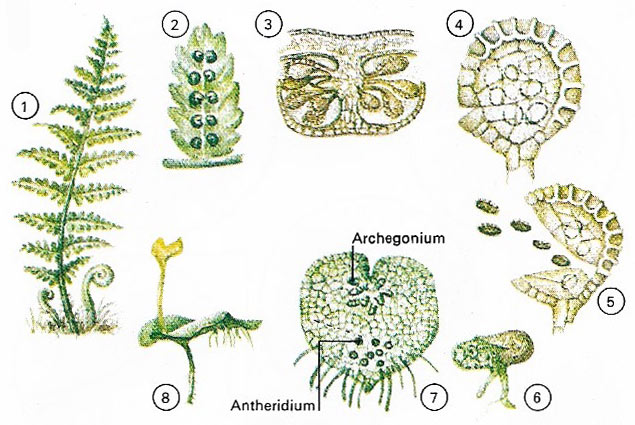 Fig 3. The dominant plant in the life cycle of Dryopteris, the male fern, is the spore producer (1). From brown patches, the sori (3), on the leaf undersides 92) asexual spores (5) are produced from masses of tissues known as sporangia(4). The spores float dust-like on the breeze and germinate in damp places (6). Each forms a heart-shaped prothallus (7) that measures 1–2 cm (0.5–0.75 in) long. On the underside of the prothallus male (antheridia) and female (archegonia) organs containing sex cells (gametes) are formed. The motile male gamete swims to and fuses with the female. Thence a new sporophyte forms (8). 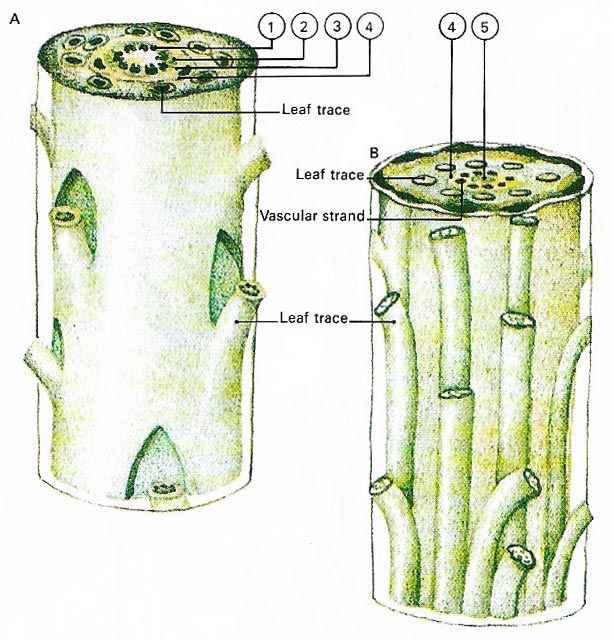 Fig 4. Ferns have more primitive systems for conducting water and mineral salts (vascular systems) than do flowering plants. The xylem or water-conducting tissue (1) is made of tracheids, single elongated cells with stiffening. Instead of the xylem and phloem (food-conducting tissue) (2) being arranged in bundles as they are in higher plants there is a more primitive arrangement. The simplest fern stem (A) consists of a solid mass of xylem completely surrounded by phloem, pericycle (3), and endodermis (4). This is a protostele. Another arrangement is the solenostele (B), which may be hollow or contain pith (5). 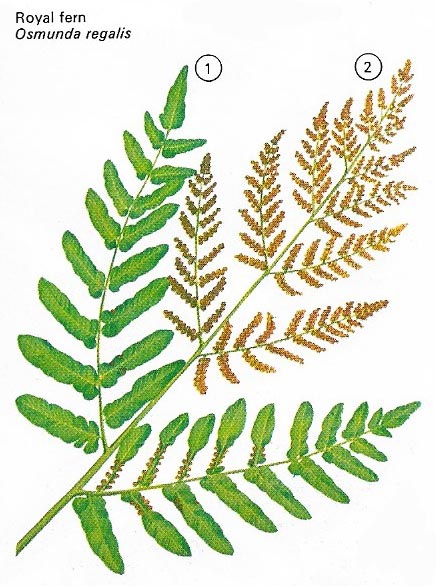 Fig 5. The royal or flowering fern flourishes in wet, peaty areas all over the world. It is common in western Europe but because it is often collected and moved to gardens its European representatives are becoming rare. The fronds of the fern show a marked difference between those that are sterile (1) and those that are spore-bearing (2). The fronds may grow to 3.5 m (10 ft) long.

A fern is a nonflowering plant of the phylum Filicineae having creeping or erect rhizomes and large conspicuous leaves. Along with horsetails and clubmosses, they are known as pteridophytes, which means that they are vascular plants (having a system of tubes for conducting water and food) and they disperse spores (Fig 1).

Ferns are characterized by their alternation of generations: the conspicuous sporophyte, which possesses leafy fronds, stems, rhizomes, and roots and reproduces by minute spores usually clustered on the leaves; and the inconspicuous gametophyte, which resembles moss and produces gametes (sperm and ova). Fronds unroll from curved "fiddle-heads" and may be divided into leaflets.

Ferns were growing in the Devonian period, some 400 million years ago. They are widely distributed throughout the world, but the majority grow in the tropics. About 10,000 species have been identified. The best-known genus Pteridium (bracken) grows on moorland and in open woodland.


Where ferns are found

Ferns and horsetails have become greatly reduced in numbers from their abundance in the Carboniferous period (Fig 2), but this does not mean that they are no longer of importance in the plant population. One has merely to see a hillside of bracken turn golden-brown in autumn to realize that some species are still very common indeed.

The key role of water in the reproduction of ferns means that most species occur in warm, damp regions. In forest and jungle, the enormous complex fronds of tropical ferns, quite unsuited to dry or exposed habitats, are ideally suited to capturing the maximum amount of light available in the forest shade. Ferns also occur in many other habitats – even as far north as the Arctic tundra – and can grow in amazing abundance.

There are about 10,000 species of ferns. The greatest number and diversity (about 2,500 species) are found in Southeast Asia where ferns and horsetails cover much of the jungle floor and also grow in the boles of trees. In contrast, there are only about 150 species of ferns and fern allies to be found growing in the countries of Europe.


Life cycle of a fern

The dominant part of the development of a fern (or a pteridophyte in general) is the sporophyte stage and is involved with the production of asexual spores. When they germinate, fern sports give rise to small, insignificant plants (prothalli) that look rather like liverworts. These are called gametophytes because they produce the sex cells. For male and female sex cells to come together, fuse, and give rise to a new spore-producing plant, water is essential because without it the male cells could not "swim" to the female cells. This need for water explains why most ferns and horsetails can exist only in damp environments and also why they are called cryptograms, a name that means "hidden marriage". To early botanists, the sexual lives of ferns were a mystery because they did not produce easily visible structures such as pollen, fruits, and seeds in the way that flowering plants do.

Many ferns are grown in gardens and greenhouses because, once established, they are highly tolerant of conditions unsuitable for most flowering plants. During the reign of Queen Victoria (1837–1901) there was a craze for fern collecting and certain types of fern, especially the so-called filmy ferns with very delicate leaves only one cell thick,were collected and grown in Wardian cases (sealed glass boxes). This led to a serious depletion of of some ferns in the wild in both Britain and Europe. Certain other genera such as Woodsia, a fern of high mountain regions, were also over-collected.

Many forms of various fern species found in the wild are grown in nursery gardens. Some of these forms have such names as Phyllitis scolopendrium "palmatum" (palmate, or hand-shaped, harts-tongue) and Asplenium trichomanes "cristatum" (crested maidenhair spleenwort). Many of the more common fern species can still be grown in shady spots in gardens where the soil is poor.

Certain ferns, such as Salvinia and Azolla spp, live totally in water. These two genera are native to tropical and subtropical regions but have been widely introduced into Europe. Water ferns can form large mats over ponds and Azolla often turns crimson.