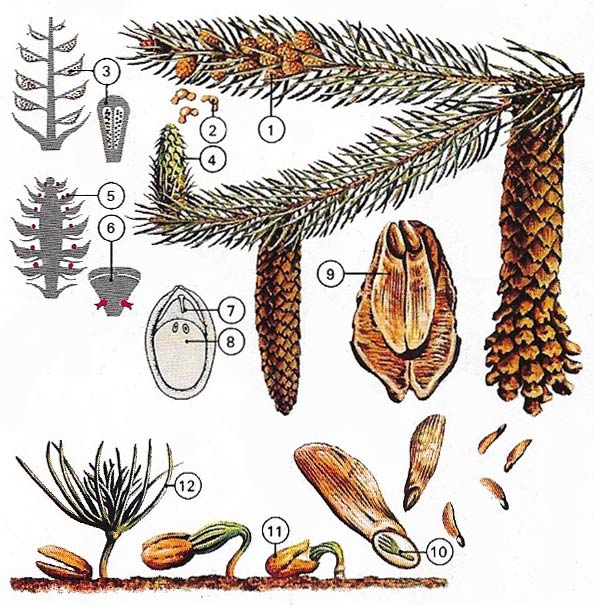 Fig 1. The reproductive cycle of the Norway spruce starts when pollen grains (2) from under the scales (3) of the male cone (1) are blown on to two unfertilized eggs (5) on scales (6) of the female cones (4). The pollen grain nucleus passes down the tube (7) and fuses with the female nucleus (8) to formed a winged seed on each scale (9). The seeds disperse and the embryo (10) germinates (11, 12). 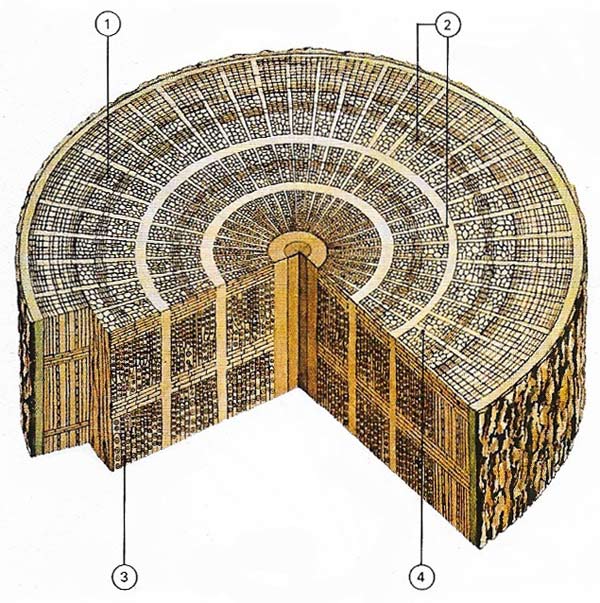 Fig 2. The wood of coniferous trees is called softwood because it is easily worked. Characteristic of gymnosperms is the absence of vessels in the vascular or water- and mineral-conducting system. In cross-section the softwood shows a single type of cell tracheid or fiber (1); when magnified this looks square in outline. Large tracheids laid down in spring alternate with smaller summer tracheids forming annular rings (2). The tubes serve mainly as space for the transport of sap through minute openings called pits (3). At right-angles to the rings, rays (4) radiate from he center for movement of sap and water. 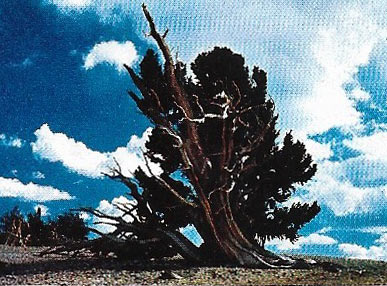 Fig 3. The Rocky Mountain bristle-cone or hickory pine (Pinus aristata) is one of a group of related trees believed to be the oldest living plants on Earth. One specimen of these short-leaved, gnarled trees is said to be 5,000 years old. 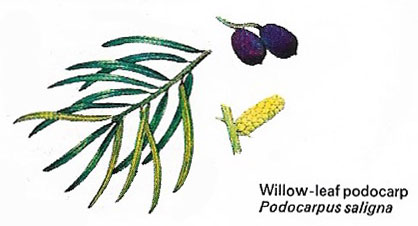 Fig 4. Podocarps or yellow-woods are native to tropical mountains. They bear berry-like cones, some of which are edible. This willow-leaf podocarp grows in the Andes of southern Chile. 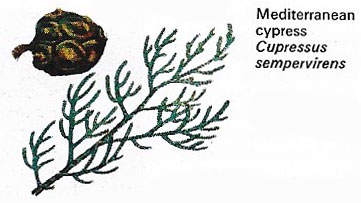 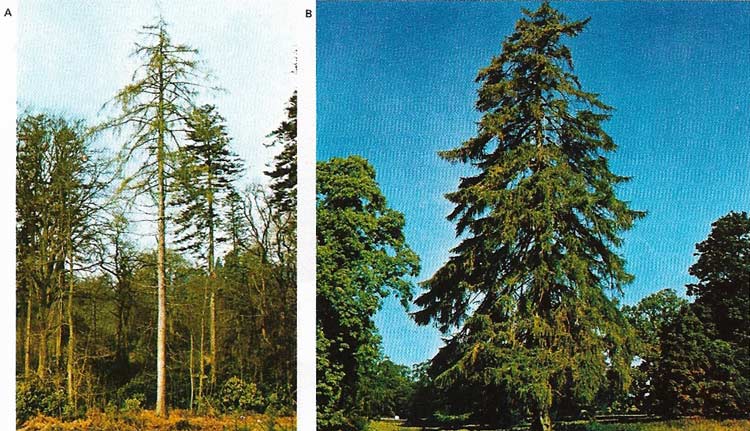 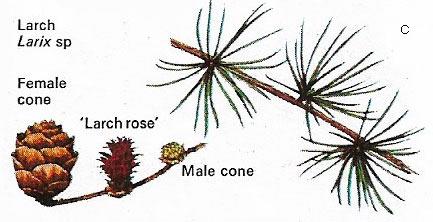 Fig 6. The larch genus includes about a dozen species that are native to the cool, temperate regions of the Northern Hemisphere. Some of them are among the most commonly planted timber trees. Larches grow tall and straight, and their coarse-grained, hard, heavy, rot-resistant wood id used in the making of ship's masts, telegraph poles, and pit props. But many people also grow larches purely for ornament because of their pleasing shape. In forests (A) the trees grow rapidly,and disease-resistant types can be selected. In the open (B) larch trees grow a fine regular crown. Larches are deciduous and sessile cones on bare twigs appear in early spring. (C) Male flowers are small, silvery, and inconspicuous; female flowers, the familiar red-purple "larch roses", are followed green cones. 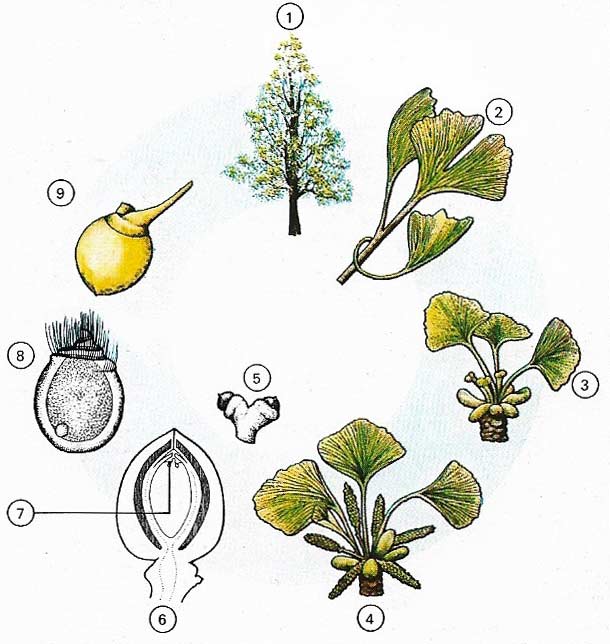 Fig 7. The maidenhair tree (Ginkgo biloba) (1) has typically lobed leaves (2) with parallel veins. The sexes are separate: female trees bear ovules (3), male ones (4) produce pollen. The young ovule (5) matures into a structure (6) equipped to receive pollen. On landing on the ovule, pollen is drawn into the pollen chamber (7), Two large motile spermatozoids (8) are produced, fertilization takes place and a naked seed is formed (9). 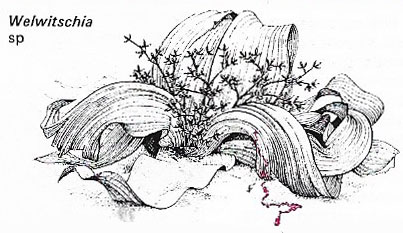 Fig 8. The Welwitschia is a remarkable woody plant, the sole member of its family. It is adapted to desert life by restricted water loss, and it grows only in parts of Southwest Africa. 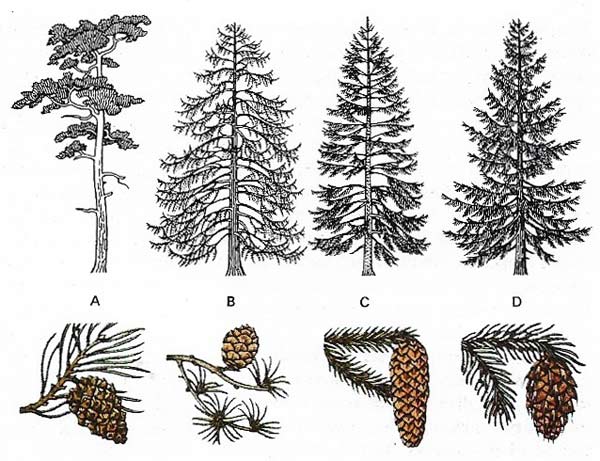 Fig 9. Conifers can be identified by their shapes, needles, and cones. The Scots pine (Pinus sylvestris)(A) has a flattened crown and triangular cones. The larch (Latrix decidua) (B), as its name suggests, is one of the few deciduous conifers. It has open cones. The Norway spruce (Picea abies) (C) has long, pendulous cones and is the European Christmas tree.The Douglas fir (Pseudotsuga taxifolia) (D) has cones with pointed scales and long, soft needles.

A gymnosperm is a seed plant with seeds that are not enclosed in an ovary. Gymnosperms make up the smaller of the two main classes of seed-bearing plants, the other being the angiosperms. All gymnosperms are perennials and most are evergreen. There are several orders, including the conifers (Coniferales), such as pine, large, fir, and redwood; the Cycadales, the cycads or sago palms; the Ginkgoales, the ginkgo; and the Gnatales, tropical shrubs and woody vines. Altogether there are about 66 genera with 600 species. The term comes from the Greek gymnos for "naked" and sperma for "seed."

Gymnosperms were of great importance in prehistoric times. They were a highly varied group that dominated the world's flora in the Mesozoic era more than 220 million years ago. Today they are represented by only a relatively small remnant of those earlier species, but they still form a very important section of the world's flora, including well-known trees such as firs, pines, and yews.

The seed plants differ from the ferns, and other pteridophytes, in the alternating of generations between sexual and asexual, or spore-producing, stages. As the male and the female cells of the sexual generation became specialized in ferns and primitive gymnosperms, the male cells were motile, with whiplash flagella that enabled the sperms to move through water or a film of moisture. This happens in cycads and ginkgo, but the "swimming" stage has disappeared in the pine and all flowering plants, thus releasing them from the restriction of needing water for the last stage of the fertilization process.

In conifers, fertilization is a complex process that takes a long time. In the pine (Pinus sp) it takes three years for the pollen grains to mature. Each grain has two wings to facilitate wind pollination and a mature tree can produce about 1 kg (2.2 lb) of pollen each year, which may be blown for some hundreds of kilometers downwind. The pollen grain landing on a female cone can take a year or more to grow in and fuse with the cell inside, and two more years may pass before the cone is mature and the seeds enclosed within it are ripe and ready for dispersal.

There are five main subgroups of gymnosperms. The Cycadlaes are tropical, palm-like trees known as tree-ferns or cycads (12). The cones of cycads can be very large, and in one species, Encephalartos caffer, cones weighing 42 kg (92 lb) have been reported – the largest cones known on any plant. Another species, the Australian Macrozamia peroffskyana, has cones 60 cm (2 ft) long.

The Ginkgoales group contains only one living genus and one species, namely the maidenhair tree (Ginkgo biloba) (10). It was thought that this species, too, had become extinct as a wild plant, but in recent years Chinese botanists have found some wild maidenhair trees, thus confirming that it does still exist in the wild state. It is a common avenue tree in American cities. The group that includes yews and podocarps is known as the Taxales and all its members have fleshy fruits. They are the only gymnosperms that do not produce cones. The fourth group of gymnosperms, the Gnetales, include the Welwitschia (11), a small, specialized class.

Most important of the gymnosperms are the Coniferales, the group that contains 48 out of the total of 66 gymnosperm genera. These are mainly evergreen, temperate trees with needle-like or scale-like leaves (Key) and they often form the dominant vegetation in colder parts of the world, being especially abundant in temperate forests both north and south of the equator. Economically they are of great importance as timber trees. Conifers are often grouped together as "firs" and most have softwood timber containing resin. This is formed in minute canals that run through the wood giving the characteristic turpentine smell to freshly sawn softwood and is the commercial source of many useful resins.


The recognition of conifers

The "firs" comprise a diverse group of trees, most of which can be identified by the shape of their cones and the number and grouping of their leaves or "needles". In the pines, for example, there are only two, three, or five needles together. In cedars (Cedrus spp) the needles are in bundles or clusters of many individuals, firm and evergreen. The larches (Latrix spp) (9), also have many needles in clusters but these are deciduous.

When the young twigs remain green through the summer the conifer may be a yew (Taxus sp) if the needles are long but short-stalked; Japanese cypress (Cryptomeria sp) if the leaves are small scales grouped in spirals, or a Californian big tree (Sequoiadendron). Where the needles are arranged in two rows on short shoots that are soft to the touch and fall in autumn, the swamp cypress (Taxodium sp) has these short shoots arranged singly, while the dawn redwood (Metasequoia sp) has the short shoots opposite in pairs on the stem. Another distinction is a clear stalking of the needles; where this occurs and the tree top overhangs, it is a hemlock (Tsuga sp). The Douglas fir (Pseudotsuga taxifolia) has sharp-pointed buds and lemon-scented needles. The silver firs (Abies sp) have characteristic round scars where needles are pulled off, while a spruce (Picea sp) needle takes a small piece of stem with it.

The conifer trees are mostly evergreens. One of the exceptions is the larch, which is deciduous. Most historic among the gymnosperms is the dawn redwood. Like the gingko it is a "living fossil" and it was only in 1941 that Chinese botanists found specimens of a tree new to them. Later expeditions found 25 trees of this species.