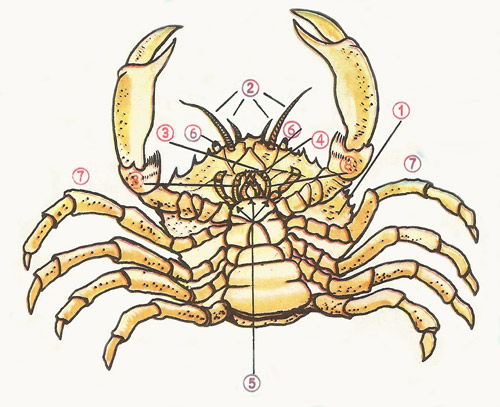 The common crab (Carcinus moenas). 1. The external shell, called the carapace, is made of chitin, a nitrogenous substance, and impregnated with salts of calcium extracted from the water in which the animal lives. It is formed by secretion from the crab's skin. 2. Two pairs of sensory appendages called antennae; they serve as organs of touch and smell. 3. The mandibles or jaws. 4. Two pairs of maxillae or accessory jaws. 5. Three pairs of foot-jaws or maxillipedes, with which the crab conveys food to its mouth. 6. Compound eyes, each one on the top of a movable stalk, so that the eyes can be erected, to see better, or laid down in a groove on each side. 7. Five pairs of limbs, of which four pairs are used for walking and the front pair, modified as pincers (chelae), for fighting, catching prey and generally as hands. Some crabs use their chelae to place marine plants on top of the shell and so camouflage themselves. 8. A set of gills, placed under the front part of the carapace and resembling rows of tiny feathers. The openings through which water passes to the gills are at the bases of the front limbs. 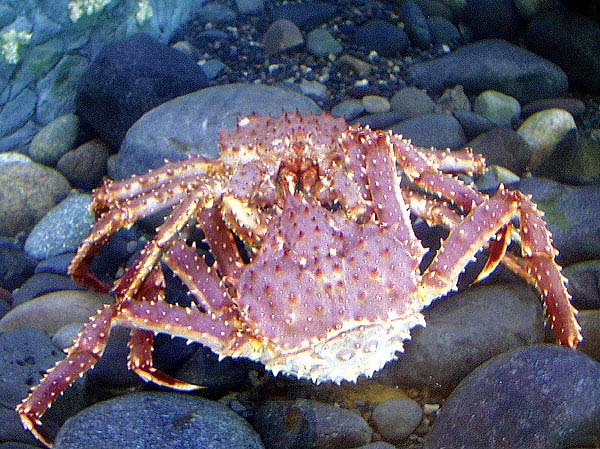 Comparison of shrimp and crab anatomy. 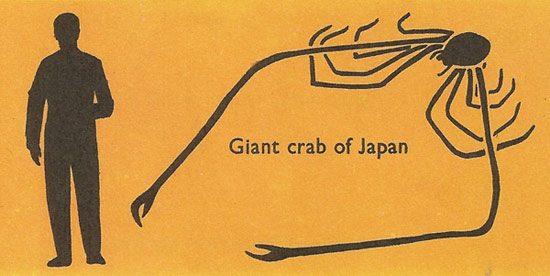 Size comparison of giant crab of Japan and man. 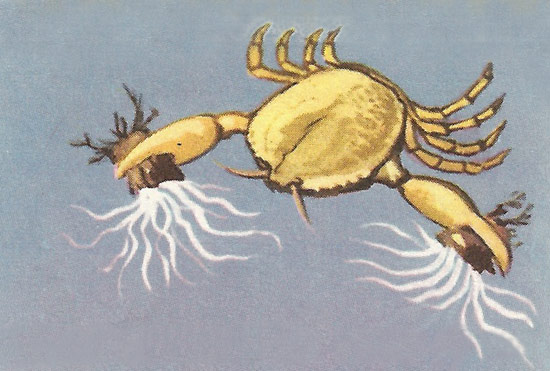 The crab is a typically marine crustacean belonging to the class Malacostraca, order Decapoda (see decapod). Crabs have a front pair of legs called chelipeds used for food capture, signaling, and fighting, and four pairs of smaller legs with which the animal can move sideways or swim. Crabs have a broad, flattened body with a hard outer covering or carapace, an abdomen permanently tucked up under the body, and eyes usually movable on stalks. Some species are terrestrial and some are found in freshwater. Eggs, carried by the female, hatch into planktonic larva or zoea.

Fifty years ago no adventure story of the sea was complete without this alarming situation: a sailor, shipwrecked on a small island, is attacked by crabs; he is shown perched precariously on the only tree on the island, while huge crabs with outstretched claws advance upon him from every side. For some reason people have always disliked crab. The ancients called it by unpleasant names: in Greek it is karkinos and in Latin cancer; both these names are derived from the early Indian word crnati, meaning to break or crush or kill; as if in killing things was the chief occupation of this unfortunate crustacean. The crab's appearance is probably responsible for its bad reputation. The rough, wrinkled carapace, the hooked feet and menacing pincers, the habit of scuttling along sideways - all these characteristics combine to inspire disgust and alarm, especially when we come across the huge and grotesque tropical kinds of crab. But in spite of its appearance the crab is not a vicious animal. In general crabs avoid man and use their pincers only in self-defence, in capturing prey or in fighting amongst themselves.

The crab belongs to the Arthropoda, one of the main classes of the animal kingdom, The word arthropod means in Greek 'with jointed legs' and indicates the most important characteristic of this class of animal. Another characteristic is that the skeleton is external - that is to say, the muscles are attached to the inside of the shell and not to bones embedded in the flesh, as ours are. Arthropods are very varied in form and curious in structure; they are the largest and perhaps the most interesting of all the main groups of animals.

Arthropods are divided into seven classes, of which Insects are the most important. Next in importance comes the class Crustacea (in which the crab is included), which is so called because most of its members are covered by a hard, 'encrusting' shell.

The stomach consists of an apparatus of hard chitin which grinds up the food and has glands which secrete digestive juices. Crabs feed on small aquatic creatures and on insects caught on the shore, and are also scavengers, feeding on refuse.

The shell of a crab does not grow with the animal, and so from time to time it becomes too tight; the shell therefore has to be changed periodically by moulting. The old shell splits and the crab creeps out of it, soft and naked; it then hides in a crevice of rock for a few days while its epidermis, or skin, forms a new shell.

If a crab loses one or more of its limbs it has the power of growing them again; this may occur as a result of a fight with another crab or an encounter with an enemy, or even a sudden fright or pain, which will cause the crab to cast off its limbs automatically. After the first moult following the accident the lost limbs are represented by little buds; with each successive moult they grow more and more until they are completely regenerated.


Crustacea: the crab and the shrimp

Although these two animals look so different they are both crustaceans and quite closely allied. Both have head and thorax joined together to form a cephalothorax.

The most obvious difference is in the abdomen, which is large and extends behind the cephalothorax in the shrimp. but is folded underneath and reduced in size in the crab. The shrimp swims actively, both with its legs and with the flattened appendages at the end of the abdomen; the crab is adapted to walk on the bottom of the sea on its four pairs of legs.

Crabs vary greatly in size, from half an inch to monsters measuring a yard across the outstretched legs. The giant crab of Japan has enormously long forelegs or chelae, which may span 16 ft. Another huge species is the Morro Crab of Cuba, which may weigh over 12 lb and has chelae so powerful that they can crush a man's hand.

Some of the things crabs do almost persuade one that they can reason intelligently, though their actions are almost entirely governed by instinct. Some deliberately place living sea-anemones, which have formidable stinging tentacles, on their backs. This secures them from attack by most of their enemies. One species goes further; it holds a sea-anemone in each claw, rather as a man might hold a pistol in each hand.

Crabs reproduce by means of eggs. Usually in winter the female crab lays some thousands of eggs from which hatch, not little crabs but tiny transparent, curiously shaped larvae. The larva lives floating in the water and sheds its chitinous covering from time to time, changing shape with each moult. At last it sinks to the bottom and assumes its final form as a crab.