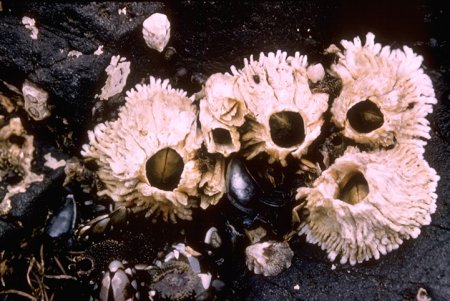 A barnacle is a marine crustacean in the subclass Cirripedia. When adult, barnacles attach themselves to rocks, boats, and certain whales. The barnacle that fixes itself to ships is the goose barnacle, which has a long muscular stalk and a shell composed of five plates. The acorn barnacles, which cover rocks, breakwaters, etc, just below high-water mark, are similarly constructed, but they have no stalk.

The manner of feeding of barnacles was vividly described by T. H. Huxley, who said the barnacle is "a crustacean fixed by its head and kicking the food into its mouth with its legs." It was a naval surgeon, J. Vaughan Thompson, who discovered in 1830 that barnacles have a free-swimming larva (or nauplius). In the Middle Ages a curious myth grew up to the effect that the barnacle changed into a sea-bird called, for this reason, the barnacle goose.