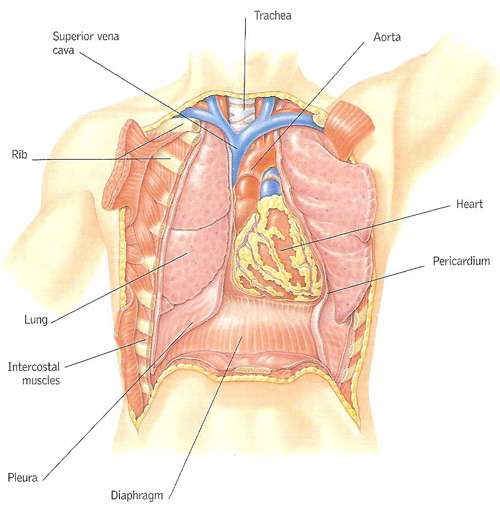 The thoracic cavity. The organs within the thoracic cavity are protected by the framework of the ribs. Thin membranes (plurae) surround the lungs to prevent friction during breathing; a membranous sac, the pericardium, protects the heart.

The thorax is the upper area of the trunk, known commonly as the chest. It extends from the base of the neck to the diaphragm, which separates the thorax from the abdominal cavity. Within the thoracic cavity, walled by the ribcage and its associated muscles, are the heart and lungs, and the body's major blood vessels and airways. A section of the trachea and esophagus are also in the thorax.


The thorax in other animals

In insects, the thorax is the second body region, located between the head and abdomen. It is the region where the legs and wings are attached. In other arthropods, especially crustaceans and arachnids, the thorax is fused with head to form a cephalothorax.

An operation in which the chest is opened to provide access to organs in the chest (thoracic) cavity.

There are two types of thoracotomy: lateral and anterior. In a lateral thoracotomy the chest is opened between two ribs to provide access to the lungs, major blood vessels, and the esophagus. In an anterior thoracotomy, an incision down the length of the sternum (breastbone) provides access to the heart and the coronary arteries.