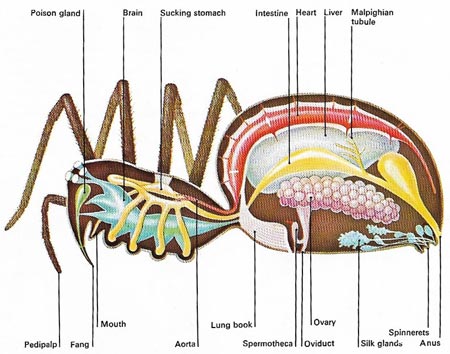 Spiders and other arachnids differ from other arthropods in having bodies divided into two sections. Head and thorax are united in a cephalothorax or prosoma, joined to the abdomen by a narrow pedicel. There are four pairs of walking legs and the eyes are simple, not compound as in other arthropods. There are no antennae. Long, straight hairs on the appendages carry out sensory functions. The mouthparts are chelicerae, or fangs, and behind them are limb-like pedipalps with sensory and feeding functions. In male spiders they are modified for the transfer of sperm. Excretory organs (Malpighian tubules) open into the hind gut. 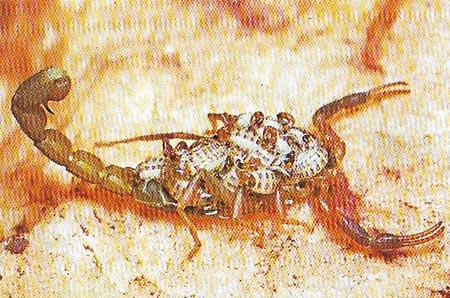 Scorpions produce their young alive, not from eggs. Newly born scorpions are carried around on their mother's back, as some spiders carry their young. Scorpion embryos develop in special brood chambers in the mother's body, so when they are born they have only to climb on to her back. They are able to hang on securely by means of small suckers on their feet and will be carried about for days or even weeks – depending on their species and the prevailing conditions – living on the remains of the embryonic yolk supply. As with spiders, scorpions are unable to leave the female until after the first molt. They become adult after six or seven moults, which takes about a year.

An arachnid is a member of the class Arachnida (phylum Arthropoda, see arthropod), which contains scorpions, spiders, harvestmen, ticks, mites, and solifugae (spider-like desert dwellers). Arachnids have an exoskeleton, four pairs of jointed, walking legs, two distinct body sections (cephalothorax and abdomen), chelicerate jaws (consisting of clawed pincers), and no wings. All are air-breathing. They lack antennae and wings. Most arachnids are terrestrial and live in soil, leaf litter, and low vegetation; some are blood-sucking parasites. About 60,000 species are known.

Insects, by contrast, have a three-part body and three pairs of legs; and most have wings. The legs of arachnids are formed on a plan similar to that of the insects, but the last segment, the tarsus ends in one, two, or three claws.

A book lung is the main respiratory organ of many terrestrial arachnids, including scorpions and spiders. Book lungs consist of a series of soft, hemolymph-filled, overlapping flaps, covered up by a plate on the abdomen, through which oxygen is taken up and carbon dioxide given off.

The chelicerae are the most anterior (forward) pair of head appendages of arachnids, lying just in front of the mouth. Each one consists of basal segment and a hollow claw; the claw has an opening near its point and is connected by a tube or duct to a poison gland inside the cephalothorax. When a spider, for example, "bites," poison is forced through the opening in the claw into the wound. Since it always bites with both chelicerae, it makes two punctures, close together; a wasp or hornet, when it stings, makes only one. In countries where dangerous spiders are found their bite can be recognized by this feature, and appropriate treatment can be given. The marks of a spider bite are closer together than those made by the fangs of snake. Solifugae, which make up a distinct order of arachnids, have unusually large chelicerae.