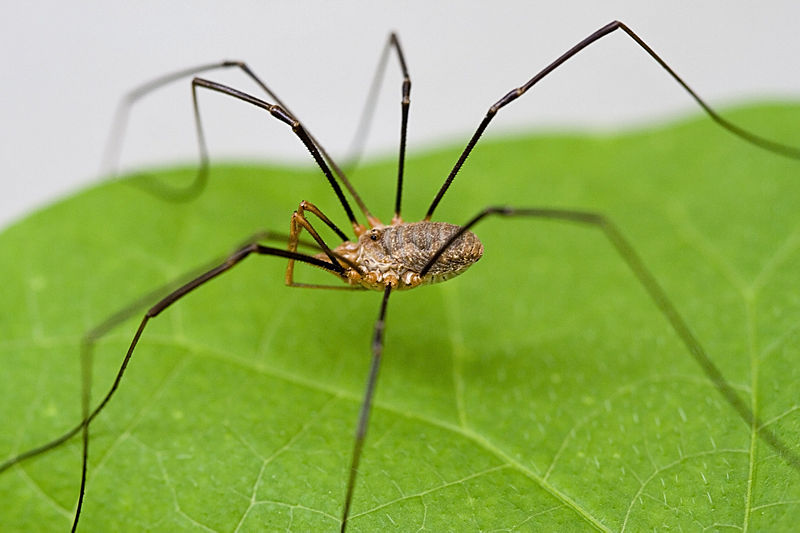 Harvestmen are an order of arachnids, and although they look like spiders, they are distinctly different. They have been around for hundreds of millions of years and fossils have been recovered from the 400 million-year-old Rhynie Cherts in Scotland.

Harvestmen vary greatly in size, with body lengths ranging from less than 1 mm to about 2.2 cm (0.87 in), although they generally don't exceed 7 mm (0.28 in). Their legs are extremely long in relation to their body; the maximum leg span is about 16 cm (6.3 in). Harvestman are usually brown or gray in color but some species have vivid patterns that include yellow, green, black, and red markings. There is a considerable degree of sexual dimorphism, with males and females differing in size, color, and body shape.

Harvestmen are mainly nocturnal but there are some diurnal species. They are also tolerant of other members of their own species, and aggregations of many individuals are often found at protected sites. These mass groupings may contain as many as 70,000 individuals and are thought to serve as a defense against predators.

The body of a harvestman is divided into two parts, the cephalothorax and the abdomen; however, the joint of these two parts is often poorly defined, giving the appearance of a single oval structure.

The cephalothorax, or prosoma, is the front portion of the body and contains the central nervous system, feeding organs, scent glands, and legs. The ventral surface is covered by a sclerotized carapace, which is formed by the fused tergites of the six appendage-bearing somites. An elevated mound, called the ocularium, lies in the center of the carapace and may bear a number of simple eyes, although some species are eyeless. Harvestmen use the stomotheca to feed through and this is formed by extensions from the pedipalps and the first pair of legs. Defensive glands called ozopores are situated on the sides of the prosoma.

The chelicerae are made up of three segments, with the distal two forming a pincer that is equipped with a row of teeth. The pedipalps are used as tactile organs, and for grasping food and for grasping mates during copulation. Some species of harvestmen have large, spiny, clawed pedipalps, whereas other species are clawless. Harvestmen have four pairs of extremely long legs in comparison to their body size, although there are some short-legged species. The second pair of legs are the longest, although this is sometimes hard to see in short-legged species, and they work like antennae.

The abdomen, or opisthosoma, is the hind part of the body and consists of ten somites. The openings of the respiratory system, called spiracles or stigmata, are located on the sides of the second somite. The genital organs are also situated on the opisthosoma and the muscles of the opisthosoma mainly regulate the volume and internal pressure of the body fluid.

Harvestmen are found throughout the world in a wide variety of habitats. They are the diverse in tropical regions and prefer to inhabit humid areas. They can be found in forests, woodlands, grasslands, urban areas, agricultural areas, and caves.

Most species of harvestmen reproduce sexually but some have only female individuals and reproduce through parthenogenesis. The males of some species defend territories, and some offer the female a secretion from their chelicerae prior to mating. Harvestmen mate through direct copulation rather than using a spermatophore, and in some species the male guards the female after copulation has occurred.

In some species, the female builds a nest in which to lay her eggs and clusters of them are laid shortly after mating or up to several months later. The males of some species are responsible for guarding the eggs that have been produced after he has mated with several different females.

The eggs can hatch anytime after the first 20 days, up until about 6 months after being laid. The young harvestmen resemble their adult form and go through four to eight nymphal stages, with six being the most common, before they reach maturity at 2–3 mo old. Adult harvestmen continue to regularly molt and although most species live for only one year, some can live longer.

Most species of harvestmen are omnivorous and feed upon insects, plant material, and fungi, but some species are scavengers and feed upon dead organisms, bird dung, and other fecal matter.

Harvestmen either actively hunt or ambush their prey and, unlike other arachnids, don't feed via a sucking or filtering method; instead they ingest small pieces of their food. This in turn leaves them susceptible to internal parasites such as gregarines.

The main predators of harvestmen include birds, mammals, amphibians, and spiders. They have several forms of defense which include playing dead when disturbed, emitting substances from their scent glands, sticking debris to their body to disguise themselves, detaching a leg that keeps on moving to confuse their predators, and long-legged species can vibrate or bob their body up and down to confuse predators.

All harvestmen are in the order Opiliones and within this are grouped into four suborders: Cyphophthalmi, Eupnoi, Dyspnoi, and Laniatores. Over 6,400 species of harvestmen have been identified worldwide, although it is thought the total number could exceed 10,000.

· Harvestmen are also known as "daddy longlegs" or "granddaddy longlegs," but these names are also used for two other unrelated arthropods; the crane fly and cellar spider.

· An urban legend claims that the harvestman is the most venomous animal in the world, but they possess fangs too short and a mouth too small to bite a human and are therefore completely harmless. In fact, none of the known species have venom glands and their chelicerae are not hollow fangs.