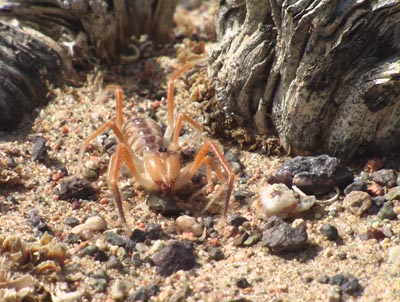 A solifuga in the Gobi Desert, Mongolia.

The Solifugae form a distinct order of arachnids (the class which also includes spiders and scorpions). Spider-like in appearance, they are fast-moving, aggressive creatures that have been the subject of many urban legends. Although capable of giving a painful bite, they are not venomous.

Solifugae vary in size, the largest having a body length of about 7 cm (2.8 in) and a leg span of about 16 cm (6.3 in). They are mostly brown or gray and, in some cases, have markings. They are one of the fastest arthropods, capable of speeds up to 16 kilometers per hour (10 mph).

Solifugae are mainly nocturnal, though there are some diurnal species. They are rarely seen during the winter months, so it is possible that they hibernate during this time.

The body of Solifugae is divided into two parts: the cephalothorax and the abdomen.

The cephalothorax, or prosoma, comprises of the head, mouth-parts, and pedipalps. It has a large anterior carapace that includes the eyes and a smaller posterior section. A distinct feature of solifugae is their large chelicerae, which are longer than the prosoma. Each of the two chelicerae are composed of two articles forming a powerful pincer and each article has a variable number of teeth. They stridulate with their chelicerae and they produce a rattling noise.

Solifugae have four pairs of legs, but the first pair are shorter and used only as tactile organs. The other six legs are for locomotion; the final pair are euipped with fan-shaped sensory organs called malleoli or racquet organs. Solifugae have long pedipalps that give them the appearance of an extra pair of legs, but these function as sensory organs, similar to the antennae of an insect. The ends of the pedipalps have eversible adhesive organs that are used for capturing flying prey and climbing over objects.

Solifugae lack book lungs, but have a well-developed tracheal system which takes in air through three pairs of slits located on the ventral side.

Solifugae inhabit arid, semi-arid, tropical, and temperate areas and virtually all deserts throughout the world, excluding Australia. Some have been known to live in grassland and forest habitats. They are solitary animals and live in scraped out sand retreats and under rocks or logs.

Solifugae breed once a year. Reproduction can involve copulation or sperm transfer via a spermatophore, depending on the species. After mating, the female digs a burrow, lays 50–200 eggs, and guards them until they hatch about 4 weeks later. During this time, the female does not feed and relies on the reserves she built up prior to mating. After hatching, the youngsters will go through nine to ten nymphal instars before reaching maturity. They have a life expectancy of about a year.

Solifugae are mainly carnivorous and usually feed on small lizards, termites, beetles, and other small ground-dwelling arthropods. They are opportunistic, fearsome predators and rely on their speed and stealth to catch their prey. They locate their prey with their pedipalps, then grasp, kill, and break it up into smaller pieces using their chelicerae. Digestive juices then liquefy the victim, enabling it yo be ingested through the pharynx.

The order Solifugae belongs to the class Arachnida. Solifugae are grouped into 12 families and within this are about 140 genera with over 1,000 described species. The order Solifugae is also known as Solpugides, Solpugida, Solpugae, Galeodea, or Mycetophorae.