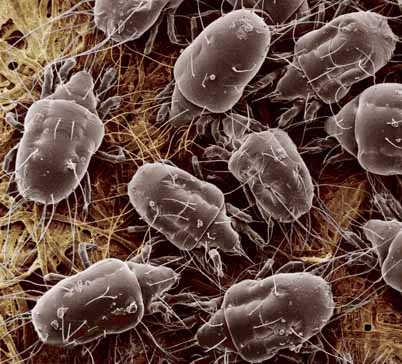 Mites and ticks together make up the order of arachnids known as Acarina or Acari. The acarines constitute the second most diverse group of animals on the planet today and are of interest to humans for various reasons. They directly affect our well-being as parasites, vectors of disease, and producers of allergens (see allergy), and are responsible for significant economic losses each year as a result of infestations of crops.

Mites and ticks are not distinguished by scientists on the basis of structure. The main distinction between the two groups is one of size: mites are smaller than ticks, and in many cases can only be seen through a microscope. A secondary distinction is that whereas all ticks are parasitic on various animals, not all mites are parasites.

Many species of mite are microscopic, and only in a few cases do they exceed 1 mm in length. Among the most diminutive (and strangest) species are the human follicle mite and the honeybee tracheal mite. These species are so tiny that they can raise a family within the confines of a human hair follicle or a bee's respiratory tube. Among the largest species of mites are the red velvet mites, which can grow to be up to 1 cm long; they are often seen hunting on the ground or on tree trunks.

Mites come in a variety of colors from clear and translucent to black. Water mites tend to be brightly colored and, despite their small size, are noticeable because of showy appearance and rapid movements.

Like other arachnids, a mite's body consists of two parts: a cephalothorax, or prosoma, at the anterior (front) end and an abdomen at the posterior. However, there is no clear demarcation of these two parts and the body appears undivided. The cephalothorax and the abdomen are fused and a region of flexible cuticle, called the circumcapitular furrow, separates the chelicerae and pedipalps from the rest of the body. The anterior body section is known as the capitulum or gnathosoma, and the remainder of the body is called the idiosoma – a section that is unique to mites and ticks.

Mites have one pair of pedipalps and four pairs of legs. In some specialized parasitic forms, the pedipalps are more or less absent, and in some forms of plant parasites, the legs are reduced to a single pair. Unlike insects, mites have no wings or antennae, although they do have hair-like bristles called setae on their bodies.

Mites have a plated exoskeleton that is critical to their survival as it provides them with protection. However, the larger the exoskeleton the more energy it takes to move it around; hence the larger shelled mites are usually found in aquatic environments.

Depending on the species, the mouth parts of mites are adapted in different ways. They may be suited to biting, sawing, sucking, or stinging, according to their food source. Many species lack eyes altogether, although some have up to five eyes.

Generally mites breathe through a pair of tracheal spiracles and have an open circulatory system in which their organs are directly bathed in hemolymph.

Mites are found worldwide and inhabit a remarkable array of habitats. They live on land, in freshwater, and in marine environments, and many parasitic species live on plants and animals.

Such is the diversity of mites that they have successfully populated polar and alpine extremes, tropical and desert environments, soils to depths of 10 meters, cold and thermal springs, waters with temperatures as high as 50°C, all types of freshwater habitats, and marine environments up to 5,000 meters (16,404 feet) in depth.

The method of reproduction in mites varies, depending on the species. Some mate via direct copulation, whereas in other species, males transfer sperm to the female using their legs or chelicerae. After fertilization, the females lay their eggs, which are then left to hatch.

When the eggs hatch the youngsters are in their larval stage, and at this point only have three pairs of legs. After their first molt they gain another pair of legs and subsequently molt several times before they become mature adults. Under ideal conditions, mites may pass through all the developmental stages, from egg to adult, in less than one week. Typically, mites have a life span of about one month.

Owing to their diversity, mites feed on a great variety of things. Some species are parasitic – mostly externally parasitic – and affect both vertebrates and invertebrates. Other species of mites are predatory and feed on arthropods.

A large number of mites are detritivores, feeding on forest litter and dead organic matter, such as skin cells. Others infest stored food such as cheese, flour, meat, and grains; yet others are plant feeders.

All mites and ticks belong to the order or subclass Acarina, within which they are split into three main groups; Acariformes, Parasitiformes, and Opilioacariformes. These groups are further subdivided into numerous families and genera. More than 48,000 species of mites have been identified. The earliest mites are thought to have come into existence since the early Devonian Period, some 400 million years ago.

Also known as bed mites, these ubiquitous creatures feed on the scales of skin that are continually falling from our bodies. They live in the fine layer of dust that settles on household items and are found throughout the world. They are known to trigger allergic diseases such as asthma and eczema.

Rarely seen, these mites live in and on the skin. Different varieties are believed to be host-specific but are easily transferable from one host to another. Large infestations on animals cause sarcoptic mange. In the case of humans, relatively few itch mites can cause unpleasant symptoms and result in a disease is known as scabies.

These are found mainly in old upholstered furniture that has been kept in a damp place and has rotted stuffing. The mites feed on the fungus in such conditions and multiply in large numbers. They rarely pose a problem in modern furniture and cannot survive in centrally heated areas.

Bird mites, or tropical fowl mites, infect birds and come into contact with humans after people have handled an infested bird, or after the mites have nested in an area inhabited by humans. They live off blood and although they will bite, they cannot live on humans.

• Mites are ubiquitous. They occur in every major ecosystem on Earth, and their specific habitats run the gamut from the familiar to the bizarre – from our backyards to the geothermal springs of the Yellowstone National Park, and from the subcutaneous tissue of turtles to our own hair follicles.

• It has been estimated that only about one tenth of all the species of mites living on Earth have been described and classified by science.

• A typical square meter of litter on a forest floor may contain around one million mites, representing at least 200 different species and 50 different families.