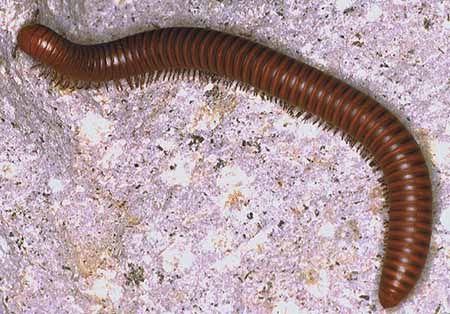 Family Julidae. These millipedes have long, cylindrical bodies with many segments. They are usually black or brown in color, with a smooth, polished surface. Some tropical species exceed 25 cm (10 in) in length. They repel their enemies by exuding a strong-smelling, corrosive liquid, but are not dangerous to man.

Family Polydesmidae. The bodies of these millipedes consist of only a few segments, each of which bears a flat plate on either side. One species, Polydesmus angustus, is often found under stones.

Family Glomeridae. These creatures, rather like a woodlice, can roll themselves up into a perfect ball. In the tropics there are numerous species, some large and brightly colored.

Millipedes are relatively common, distinctive, slow-moving arthropods, members of the class Diplopoda, which can be found throughout the world. They have been in existence for millions of years, in fact the oldest known land animal is the Pneumodesmus newmani, a species of millipede that lived 428 million years ago in the late Silurian period.

Millipedes come in a wide range of sizes, from the smallest at around 2 mm in length to the giant African millipede (Archispirostreptus gigas) which can reach lengths of 28 cm (11 in). They can have as few as eleven body segments or as many as several hundred. Generally they are black or brown in color, although there are some more brightly colored species.

They are, of course, most notable because of their large number of legs, and although they move rather slowly they are powerful burrowers. Each pair of legs has its own set of muscles; and the pairs move together, each being slightly out of sync with the pair in front and behind. This is what causes the wave-like effect when millipedes walk, and also enables them to easily force their way underground head first.

Millipedes have a cylindrical or flattened body that consists of three parts; head, thorax, and abdomen. The split between thorax and abdomen, however, is not visually obvious.

Millipedes have a rounded head, flattened on the underside, and have large mandibles. The body has a single chitinous plate on the dorsal side and two or three such plates on the underside. In many species these plates are fused together to various degrees and the plates are typically hard and provide the millipede with protection.

The body is made up of segments, most of them are formed by the fusion of two embryonic segments called diplosegments or double segments. The thoracic segments are the first three segments and are not fused in this way. The first thoracic segment is legless and the other two only have one pair of legs each. All of the following segments make up the abdomen and each has two pairs of legs, although in some species the last few segments may also be legless, and the final segment bears a telson.

Millipedes have a tracheal respiratory system and take in air through spiracles that occur down each side of the body. The heart runs the entire length of their body with an aorta that stretches into the head. The excretory system consists of two pairs of malpighian tubules located near the mid part of the gut.

Millipedes have simple eyes and, depending on the species, may have between 4 and 90 ocelli arranged in a group on the front/side of their head. They have poor eyesight and some cave-dwelling species have no eyes at all. To feel, millipedes have a pair of antennae at the base of which is a pair of sensory organs known as the Tömösvary organs; it is thought that these are used to measure humidity in the surroundings.

Millipedes are found on every continent, except Antarctica. They usually prefer dark, damp habitats and can be found under leaf litter, piles of wood and stones, or burrowed into the soil. Two species of millipede, Archispirostreptus syriacus and Orthoporus ornatus, prefer dry habitats and are desert-dwellers. Some species are arboreal and others are alpine, living at altitudes up to 2,800 m (9,190 ft).

Millipedes generally reproduce via copulation, but in some species in which there are only females reproduction is through parthenogenesis. Males have one or two pairs of legs that are modified into gonopods; these are usually situated on the seventh segment and are used to transfer sperm packets to the female during mating. The female stores these sperm packets until she is ready to lay her eggs.

Typically females lay between 10 and 300 eggs, depending on the species, and fertilize them with the stored sperm packets. They usually just lay their eggs into moist soil or leaf litter, but sometimes construct nests. After a few weeks the youngsters hatch and upon hatching have either no or very few pairs of legs. At first they grow quickly, molting their exoskeleton and gaining body segments and legs each time.

Millipedes typically take three years to reach maturity but some species can take longer. As adults they have a variable life span, the longest-lived species surviving for up to 10 years.

Millipedes are mainly herbivorous with a diet that consists of decaying vegetation or organic matter mixed with soil. Some species of millipede are omnivorous or carnivorous and feed on small arthropods, such as insects and centipedes, and earthworms. Others have mouth parts that are able to pierce plants, enabling the millipede to feed on the plant juices.

Many species of millipede moisten their food before they eat it to aid digestion. The digestive tract is a simple tube with two pairs of salivary glands to digest their food.

Millipedes have many predators including elephant shrews, insectivores, rodents, mongoose, frogs, lizards, tortoises, birds, and some other invertebrates.

The main form of defense used by millipedes is to curl up tightly into a coil, protecting their legs inside an armored exterior, as they lack the ability to sting or bite. Many species also emit a poisonous secretion through microscopic pores along the sides of their body. Sometimes this substance is strong enough to burn the exoskeleton of ants and other insects and also the skin of larger predators.

One species, Polyxenus fasciculatus, is known for employing detachable bristles as a form of defense. These bristles have grappling hooks at the tip and barbs along the length and they entangle predatory ants.

Millipedes are a group of arthropods that fall into the class Diplopoda. Within this class there are 3 subclasses which are subdivided into 15 orders. Within these orders there are 115 families, containing around 10,000 species.

• The name millipede comes from the Latin milli for 'thousand' and ped for 'foot.'

• Despite their name, millipedes do not have 1,000 legs, although the species Illacme plenipes is the closest with some individuals having 750 legs.

• Millipedes can be garden pests as they can cause severe damage to new seedlings.