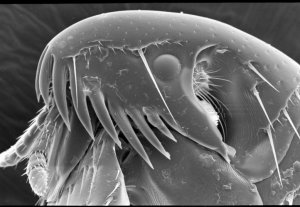 An ocellus is a simple light-receptor or primitive eye found in many invertebrates. An ocellus typically consists of a small number of sensory cells and a lens. Although capable of sensing light, ocelli supply no information about the direction from which it is coming.

Insects have two types of ocelli. Dorsal ocelli occur in insects that also have compound eyes. There are generally three of them, forming a triangle on the dorsal surface or the top of the head. Dorsal ocelli consist of a few tens of rod cells covered with a corneal lens.

Lateral ocelli are the only eyes of the larvae of several orders of insects, including fleas, silverfish, springtails, and Strepsiptera. They have a mixture of rod cells and cone cells and are found on the sides of the head, one to six on each side.

The term ocellus is also applied to eye-like markings, for example on some butterfly wings or the long display feathers of peacocks. In many species, such markings give protection by appearing threatening or by diverting attention from vital body parts.