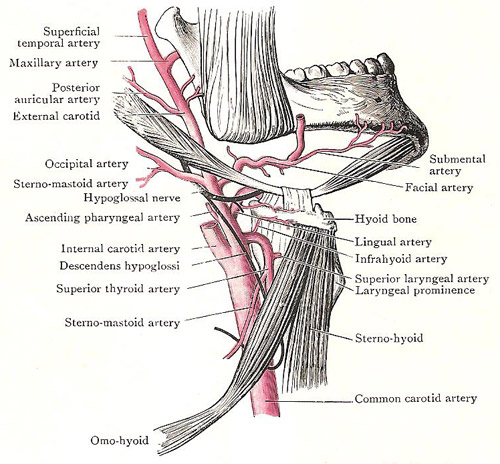 The external carotid artery is one of two terminal branches of the common carotid, and is named "external" because it is distributed to parts outside the skull.

It begins at the level of the upper border of the thyroid cartilage, runs upwards and backwards, and ends behind the neck of the mandible, opposite the lobule of the auricle, by dividing into the superficial temporal artery and the maxillary artery. Its lower part is anterior and medial to the internal carotid artery, and is comparatively superficial in the upper part of the carotid triangle; next, it passes under cover of the posterior belly of the digastric and the stylo-hyoid muscle and the lower part of the parotid gland. At the upper border of the stylo-hyoid it enters a deep groove in the parotid; and leaves it to end between the gland and the neck of the mandible.

As it lies in the carotid triangle, it is covered by the skin, superficial fascia and platysma, branches of the anterior cutaneous nerve of the neck and the cervical branch of the facial nerve, and the deep fascia. Beneath the deep fascia, it is crossed superficially by the common facial and lingual veins and the hypoglossal nerve; at the upper part of the triangle it may be overlapped by the lower end of the parotid gland. After it leaves the carotid triangle it is overlapped by the angle of the mandible, and is crossed by the posterior belly of the digastric and the stylo-hyoid. Within the parotid gland, the posterior facial vein is superficial to it, and both vessels are crossed by branches of the facial nerve.


Branches of the external carotid artery