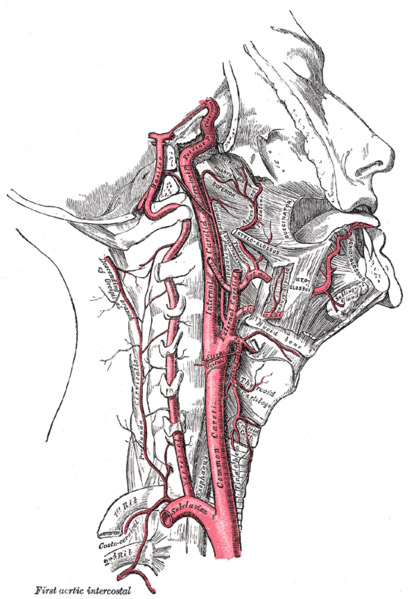 The internal carotid artery is one of the two terminal branches of the common carotid, and it begins, therefore, at the level of the upper border of the thyroid cartilage. From that point it proceeds almost vertically upwards to the base of the skull; there, it disappears from view by entering the carotid canal, through which it reaches the interior of the cranium.

Posterior to the intercarotid are the longus capitis and the sympathetic trunk. The vagus is posterolateral, and so also are the glossopharyngeal, accessory, and hypoglossal, near the base of the skull.

The internal jugular vein is lateral, except near the skull where it becomes posterior. Medially, the internal carotid is related to the constrictors of the pharynx.

The structures that are superficial to it are very numerous. In the first part of its extent, it lies in the carotid triangle, and is therefore fairly near the surface. It is covered by the skin, platysma, and faciae, and is overlapped by the sternomastoid muscle. It is crossed by the lingual and common facial veins, the occipital artery, and by the hypoglossal nerve. The descendes hypoglossi descends on its superficial surface.

As it proceeds upwards, it passes under cover of the posterior belly of the digastric, the stylohyoid, the stylopharyngeus, and the styloid process, which separate it from the parotid gland.