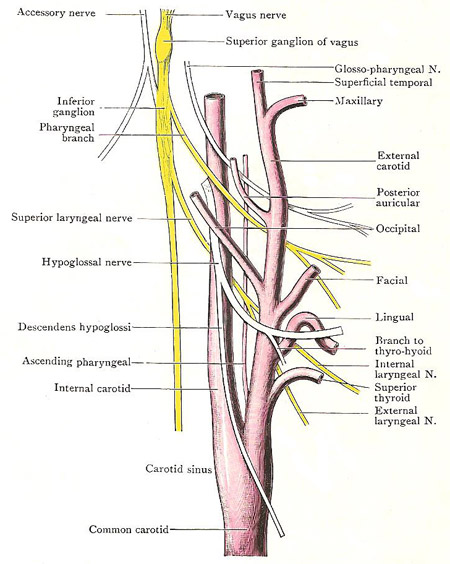 Carotid system of vessels in the neck, including the common carotid.

The common carotid arteries are vessels that supply blood to the head, neck and brain. There is one of on each side of the neck but they arise differently. The right artery arises as a terminal branch of the innominate artery behind the sternoclavicular joint. The left artery arises in the thorax from the arch of the aorta, passes upwards and to the left, and enters the neck behind the left sternoclavicular joint.

From the sternoclavicular joint each artery runs upwards, backwards, and slightly laterally to the level of the upper border of the thyroid cartilage, which is opposite the disk between the third and fourth cervical vertebrae; it ends there by dividing into the internal carotid and external carotid arteries. As a rule it has no other branches.

It is enclosed, with the internal jugular vein and the vagus, in the facial carotid sheath. The vein is on its lateral side, and may overlap it anteriorly. The vagus is in the posterior part of the interval between the vessels.

The part of the common carotid that lies above the level of the superior belly of the omohyoid is covered by the skin, the superficial fascia and the platysma, the deep fascia and the anterior margin of the sternomastoid.

The longus cervicis and longus capitis separate the common carotid from the cervical transverse processes. The sympathetic trunk lies lengthwise directly behind it, and the vagus is postero-lateral to it. The inferior thyroid artery crosses behind it, at the level of the cricoid cartilage; the vertebral artery lies between it and the transverse process of the seventh cervical vertebra; and, at the root of the neck, the subclavian artery is postero-lateral to it. The recurrent laryngeal nerve crosses behind the right artery immediately above its origin; and the thoracic duct turns laterally behind the left artery, between it and the vertebral artery.

The lower part of the artery is related medially to the trachea and esophagus, and to the recurrent laryngeal nerve in the angle between them; the upper part is related to the larynx and pharynx. The lobe of the thyroid gland lies either medial to the artery, separating it from the esophagus, pharynx, trachea, and larynx, or it forms a direct anterior relation.

The upper part of the common carotid artery and the root of the internal carotid are slightly dilated. The dilated part is called the carotid sinus, and is part of the mechanism that regulates blood pressure. Distension of the sinus stimulates nerve endings in its walls (which are more elastic than the adjacent parts of the arteries) and reflexly causes slowing of the heart-rate and lowering of the blood pressure. The carotid body is a small gland-like structure consisting of small cells arranged in clumps. It is located on the deep surface of the carotid bifurcation.

Both the carotid sinus and carotid body are innervated by the sinocarotid nerve, derived mainly from the glossopharyngeal, but connected also with the vagus and sympathetic trunk.