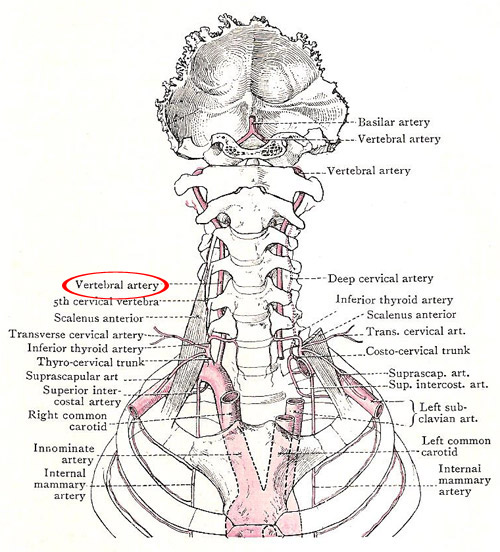 Vertebral artery shown in relation to subclavian arteries and their branches.

A vertebral artery is either of two arteries of the neck which branch from the subclavian arteries and unite to form the basilar artery in a complex called the vertebrobasilar system, which supplies blood to the posterior part of the circle of Willis and thus significant portions of the brain.

Each vertebral artery begins in the root of the neck as a branch of the first part of one of the subclavian artery, and runs upward through the transverse processes of the upper six cervical vertebrae to the base of the skull. It enters the skull through the foramen magnum, and unites with its fellow of the opposite side, at the lower border of the pons, to form the basilar artery. On account of its varying relations it is divided into four parts.


Parts of the vertebral artery

The fourth part turns upward, pierces the dura mater, and enters the skull through the foramen magnum, in front of the uppermost tooth of the ligamentum denticulatum; then, turning anteromedially, between the hypoglossal nerve above and the first cervical nerve below, it passes to the anterior surface of the medulla oblongata, and, as already stated, joins its fellow of the opposite side at the lower border of the pons.

The vertebral vein issues from the aperture in the transverse process of the sixth cervical vertebra. It passes downwards, behind the internal jugular vein, to open into the back of the innominate vein a little below where it starts.