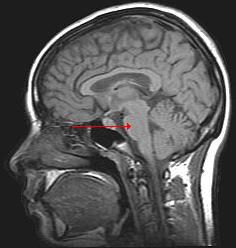 1. Also called the pons Varolii, the pons is a structure located in the lower brainstem just above the spinal cord, and bulging forward in front of the cerebellum, from which it is separated by the fourth ventricle. It consists of a thick bundle of nerve fibers that links the medulla oblongata to the thalamus. From its front surface the trigeminal nerve emerges. The pons serves as a major pathway for motor and sensory information between the body and higher level brain functioning.

2. A pons is also any portion of tissue that joins two parts of an organ.