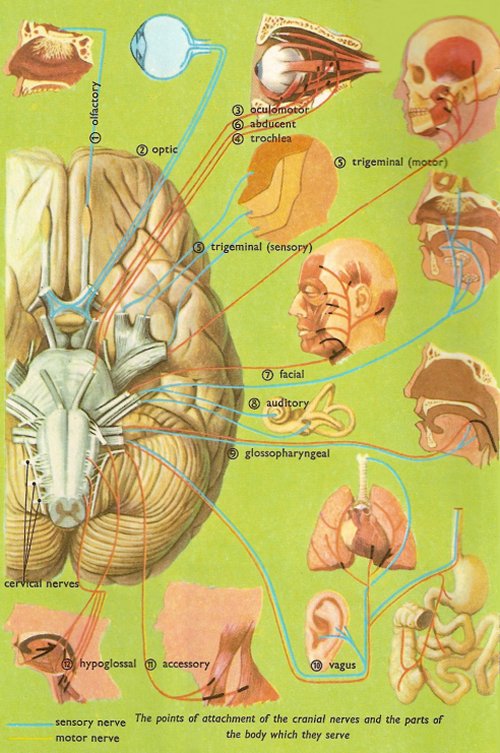 1. Olfactory nerve. A sensory nerve which carries the sensations of smell from the olfactory mucosa in the nose.
2. Optic nerve. A sensory nerve which carries the sensations of vision from the retina at the back of the eye.
3. Oculomotor nerve.
4. Trochlear nerve.
5. Trigeminal nerve. This is a mixed nerve. It contains the sensory fibers from the face and the motor fibers which control the muscles of mastication.
6. Abducens nerve. Nerves 3, 4, and 6 are all motor nerves. They supply the muscles around the eyeball and carry the impulses which move the eye.
7. Facial nerve. A mixed nerve. The motor fibers supply the facial muscles of expression and several muscles in the neck. The sensory fibers carry taste sensations from the front of the tongue.
8. Auditory nerve. In effect the auditory nerve consists of two quite separate parts, both of which have sensory functions. One part is the cochlear nerve which carries the sensation of hearing from the cochlea. The other part is the vestibular nerve which carries, from the vestibule of the ear, information concerning the position and movements of the head.
9. Glossopharyngeal nerve. A mixed nerve. It supples a single muscle in the neck and carries sensations from the tongue and pharynx.
10. Vagus nerve. This important nerve is part of the autonomic nervous system. It is a mixed nerve which supplies the heart, lungs, intestines, and larynx.
11. Accessory nerve. Motor fibers in this nerve supply muscles in the neck.
12. Hypoglossal nerve. A motor nerve which controls the tongue muscles.

A cranial nerve (CN) is a nerve that emerges directly from the brain of vertebrates, as distinct from a spinal nerve, which emerges from the spinal cord. All the cranial nerves, except the vagus nerve, pass through the foramina of the skull to innervate structures in the head, neck, and facial region.

Cranial nerves supply the sense organs and muscles of the head, neck, and viscera. Like spinal nerves, cranial nerves have dorsal and ventral roots (see nerve root) and each root is numbered and named as a separate nerve.

Twelve cranial nerves are conventionally recognized in humans. They are designated both by name and by numerals (Roman I–XII), or Arabic 1–12) according to the order (from front to back) in which they appear on the inferior surface of the brain, as shown in the table below. (Click on a link to learn more about a specific nerve.)

Note that cranial nerve 0 (aka CN XIII), the nervous terminalis, is not commonly mentioned in textbooks as part of the classic twelve. It used to be thought that it was a vestigial remnant and not very common in most adult brains. However, it is now known to be unequivocally a normal and common part of the adult human brain and does serve physiological functions, likely related to reproductive behavior.

Most of the nerves have both sensory and motor components (see the section below). Three of the nerves are associated with the special senses of smell, vision, hearing, and equilibrium and have only sensory fibers. Five other nerves are primarily motor in function but do have some sensory fibers for proprioception. The remaining four nerves consist of significant amounts of both sensory and motor fibers.

Nerves which carry sensations from the skin and the sense organs to the brain and the spinal cord are called sensory nerves. Their messages travel towards the central nervous system. Nerves which carry impulses telling muscles how to work are called motor nerves. Their messages travel away from the central nervous system. Besides these purely sensory and purely motor nerves, there are many nerves which contain fibers of both kinds. These are called mixed nerves.